The movie lands on Amazon Prime Video on 30 April

While Amazon Prime Video already has a Jack Ryan TV show, they are set to welcome a spin-off of Tom Clancy's popular franchise to the screen with new action flick Without Remorse.

END_OF_DOCUMENT_TOKEN_TO_BE_REPLACED

Based on Clancy's 1993 novel of the same name, Michael B. Jordan of Black Panther and Creed fame stars as elite Navy SEAL John Clark, one of the most popular characters in the Jack Ryan universe.

When a squad of Russian soldiers kills his family in retaliation for his role in a top-secret op, John pursues the assassins at all costs.

Joining forces with a fellow SEAL (Jodie Turner-Smith, Queen and Slim) and a shadowy CIA agent (Jamie Bell, Rocketman), his mission unwittingly exposes a covert plot that threatens to engulf the US and Russia in an all-out war. 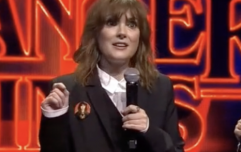 END_OF_DOCUMENT_TOKEN_TO_BE_REPLACED

Tom Clancy's work has been adapted for the screen successfully multiple times, most famously with The Hunt for Red October and the Harrison Ford starring flicks Patriot Games and Clear and Present Danger.

This, coupled with the action packed trailer below, means we're excited for Without Remorse to drop on Amazon Prime Video on April 30.

popular
Bette Midler wants the US to ban Viagra because it’s ‘God’s will’ to have a ‘limp d**k’
Travis Barker’s daughter shares picture of Blink-182 star in hospital bed - tells fans to ‘send your prayers’
British teen says she was raped in Majorca hotel by 'famous actor and musician'
Police hunt for two 'laughing' men who kissed three-year-old girl in front of distressed mum
Father takes his own life after 18-month-old found dead in hot car
'You're disgusting': Prince William roars at photographer who was 'stalking' his family
Halifax has introduced staff pronoun badges and its customers are not happy
You may also like
Entertainment
The Boys Season 3 gets 1 star reviews as viewers outraged by nudity, violence and 'political agenda'
Entertainment
Stranger Things viewers left worried for Lucas after spotting key detail in behind-the-scenes footage
Entertainment
Black Mirror season six is already on its way to Netflix - and fans are losing it
Life
Chaos as social media star nearly burns kitchen down during online marathon
Entertainment
One of the most discussed nominees at this year's Oscars is now available to watch at home
Next Page