Prediction: people will get high in this movie

Kevin Smith has revealed that rappers Redman and Method Man are going to cameo in the Jay and Silent Bob reboot. 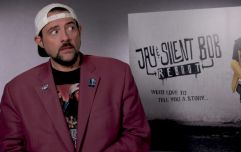 END_OF_DOCUMENT_TOKEN_TO_BE_REPLACED

Smith is bringing back his iconic duo, played by him and his real-life childhood friend Jason Mewes, in a reboot rather succinctly titled Jay and Silent Reboot.

Filming started last month, and now Smith has let slip that that two of the 1990s greatest rappers are going to be appearing in it.

The director posted a snap of him and Mewes with Red and Meth on Instagram.

Method Acting! In Jay and Silent Reboot, we finally answer the immortal question: How high? So Jason Mewes and I turned to the only men who might be able to solve this eternal mystery: Method Man and Redman.

Smith even said that they were consummate pros on set.

Holy fuck, what a great night we had on set! It was a gigantic, packed day where we had a hundred extras and I was in and out of costumes - and in the middle of it all was the Mef and Red scene. But the moment we called “Action,” the legends launched into the single best first take I ever shot in 25 years: they were pitch-perfect and hysterical (and a little touching)! It was so good, I could’ve cut their whole performance from that one take! An Avenger has joined the Jay and Silent Bob reboot

END_OF_DOCUMENT_TOKEN_TO_BE_REPLACED

Despite that film intending to be the end of their saga, they would return once again for the belated Clerks II in 2006.

Outside of Smith's movies, Jay and Silent Bob also made appearances in the Clerks comic books and animated series, and cameoed in Scream III.

Method Man and Redman have made multiple acting appearances between them, and even had their own buddy comedy How High - which gave us this banger.