It comes after the series' first posters were released in March

Marvel have dropped a new trailer for the upcoming Loki series, its third Disney+ streaming series, having already released WandaVision and The Falcon and the Winter Soldier. 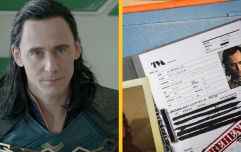 END_OF_DOCUMENT_TOKEN_TO_BE_REPLACED

Tom Hiddlestone is back in his role as the Asgardian god of mischief and one of the Marvel Universe's most loved characters. But this isn't exactly the same Loki that fans have got to know over the years, as the series follows the Loki of an alternate timeline who used the Tesseract to escape custody, after the Avengers' Infinity Stone heist that fans will remember from Endgame.

It doesn't look like there will be anything to worry about though, as the god of mischief appears to live up to his title if the trailer is anything to go by.

So far though, Marvel have been very quiet about the plot of the series, with the official synopsis only saying: "In Marvel Studios’ Loki, the mercurial villain Loki (Tom Hiddleston) resumes his role as the God of Mischief in a new series that takes place after the events of Avengers: Endgame."

It's safe to say that the latest trailer has got fans very excited, with the comments featuring a lot of caps lock.

I CAN’T WAIT THE BEST SHOW IS COMING pic.twitter.com/UhZMKOVwy3

The series is being released on 11 June and is six episodes long. After the success of WandaVision and The Falcon and the Winter Soldier, it looks like Marvel are really delivering on their content for Disney+.