Love Island just won a BAFTA, and everyone had the same reaction

Love it or hate it, Love Island was a genuine phenomenon last year. It got record viewing figures for ITV2, everyone was talking about, and even Stormzy popped up on it. It almost gave us a Blazin’ Squad revival. 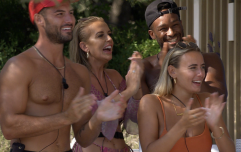 END_OF_DOCUMENT_TOKEN_TO_BE_REPLACED

The BAFTA TV awards took place on Sunday night, and Love Island triumphed, picking up the award for best “Reality and constructed factual” show – yes, that’s a real award. It beat out Celebrity Hunted, Old People's Home for 4 Year Olds and The Real Full Monty to scoop the prestigious gong. Love Island can now officially be described as ‘award winning’.

Love Island is somewhat of a polarising show. Those who love it are obsessed. And those that don't tend to hate it. So the news was faced with a lot of reaction like this:

I think I’ve just read #LoveIsland won something 🤷🏼‍♀️I’m not sure I belong on this planet anymore!! 🤦🏼‍♀️ #BAFTATV

TOWIE and Love Island are both #BAFTA winners. This country's properly had it.

There was a lot of facepalms and sighs, basically. There were of course some fans of the show who were happy to see it win, but it was mostly "what has society come to?" type posts.

Hot take time: Love Island is not high art. But it is not trying to be. It is dumb, and vapid, and disposable. But what is wrong with that? It is highly watchable, and fun, and entertaining. People work hard all day, so what's wrong with them watching some attractive people bicker in the Spanish sun on ITV2 to unwind? If you hate Love Island, that's fine. But no one is forcing you to watch it. Why moan at others for enjoying it. It is not harming you. Go and watch BBC4 or your Scandinavian crime dramas or three hour long arthouse movies or whatever it that you think makes you superior to ITV2 viewers, and enjoy those things. Let people enjoy what they enjoy, and leave them be. Life is hard enough, and we all deserve to enjoy some dumb crap we like, without being chastised for it.