A new trailer has dropped

A new trailer has confirmed that Love Island's latest series will indeed be returning before the month is out. 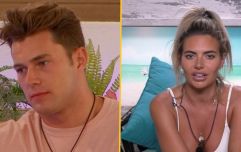 END_OF_DOCUMENT_TOKEN_TO_BE_REPLACED

The trailer, which features Iain Stirling making the announcement, shows a bunch of singletons (presumably actors) rushing into each others' arms.

The fun-filled teaser also shows Laura Whitmore break open an emergency box with a hammer which reads 'In case of Love Island, crack on'.

Recently, news broke that showrunners were looking for at least half of the contestants to be bisexual.

Whilst this wouldn't be the first time that the show has had bisexual contestants, previous seasons have focused almost entirely on mixed-gender pairings.

A source reportedly said: "Love Island has always been inclusive – the only criteria is that you’re over 18 and looking for love.

"But this is the first year that finding contestants with more fluid sexuality has been part of the briefing."

The casting team are said to be "doing their best to tick that box" as they begin the search for contestants for the new series.

According to The Sun, the Love Island crew are flying out to Majorca on June 20th, and filming is expected to begin a week later.
Advertisement

popular
North Korea is running out of food as a bunch of bananas 'now costs $45'
GB News fans cancel Specsavers because they hate cancel culture
Paul Gascoigne reckons he was a better player than Foden even when he was drunk
A definitive ranking of every swear word from worst to best
John McGinn asks for a bottle of Coke at Euros press conference
Russian manager goes against Ronaldo and drinks bottle of Coke at press conference
GB News reads out prank messages from 'Mike Hunt' and 'Mike Oxlong'
You may also like
Social Media
Love Island star Demi Jones announces she has thyroid cancer
News
Police called to Love Island's Megan Barton-Hanson's home over suspected party
Entertainment
ITV confirms Love Island will return this summer
Entertainment
Love Island South Africa criticised for near all-white cast despite 80% black population
Fitness & Health
Dr Alex interview: The only influencer whose work is actually essential
Next Page