Louis Walsh officially gone from next series of X Factor

Louis Walsh has announced that he is quitting The X Factor after 13 years.

The Irishman first appeared in the first series in 2004 and confirmed in a statement that he was "ready to leave."

Louis said: “I’ve had a fantastic 13 years on The X Factor but the show needs a change and I’m ready to leave.

“I’m looking forward to another series of Ireland’s Got Talent, going back to my day job as a manager, writing my memoirs and seeing the world!”
Advertisement

Thames Managing Director, Amelia Brown, added: “Louis has been a huge part of The X Factor’s success since it launched and remains a good friend of the show. 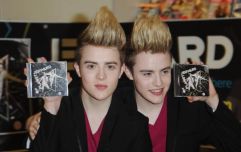 END_OF_DOCUMENT_TOKEN_TO_BE_REPLACED

“His contribution cannot be overstated. We would like to thank him for all he has given to the show over the years and look forward to continuing to work with him in the future.”

Meanwhile, we now know that Sharon Osbourne will be back for the 2018 series and will appear as a judge during the live shows.