She might have to take it off the album.

Every piece of art is in some way influenced by another piece of art. It's arguable that no idea can be completely original, especially in the world of music. 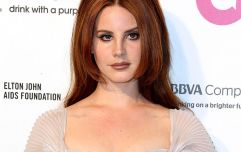 END_OF_DOCUMENT_TOKEN_TO_BE_REPLACED

Some songs resemble their inspiration more than others, though. That is certainly the case for Get Free, Lana Del Rey's new song, which has been the subject of a copyright lawsuit between her and Radiohead. The band claim it sounds too similar to their 1992 song Creep.

It has to be said, there are similarities between the two songs.

Lana Del Rey explained on Twitter that she has offered Radiohead 40% of the song's publishing royalties, but the band's lawyers are determined to fight for 100%.

The 32-year-old singer is now preparing to remove the song from her latest album, Lust for Life, if she loses the legal battle with Radiohead. At a concert in Denver, Colorado on Sunday, she told her fans:

"Regardless if it gets taken down off of everything, that those sentiments that I wrote...that I really am going to strive for them, even if that song is not on future physical releases of the record."

Some may see Radiohead pursuing this case as a bit rich, given that their song Creep has been likened to Air That I Breathe by The Hollies.

let me get this straight thomas; you say you wrote lana's song? you didn't. you nicked it from the hollies. i know the words to candle in the wind it don’t make me elton john. i'm beginning to think u have a bloomin radio for a head, what with all the rubbish i'm hearing outta u pic.twitter.com/cxkIPyiuot

Lana Del Rey will be hoping she can get free from this situation amicably...