Keanu Reeves has revealed the official title for John Wick 3

The John Wick movies are the gift we don’t deserve

With the current blockbuster landscape dominated by bloated superhero movies and regurgitated IPs, John Wick and its sequel have been exactly what we need: a short, sharp shot of unironic action movie goodness. The combination of clean, clearly shot action, unique worldbuilding and Keanu Reeve’s effortless cool have made them modern cult classics.

After John Wick: Chapter 2 ended on a cliffhanger, fans are eagerly awaiting what happens next. There is a spin-off TV series entitled The Continental in the works, focusing on the mysterious hotel that the assassins hang out at.

But what we’re really waiting for, of course, is John Wick: Chapter 3.

Only it won’t be called that – we now know the official title, thanks to Wick himself, Keanu Reeves.

In an interview with Coming Soon, Reeves confirmed the title: John Wick 3: Parabellum.

But what the hell does ‘Parabellum’ mean? Reeves explained:

Prepare for war. It’s part of that famous sentence, “Si vis pacem, para bellum,” which translates as, “If you want peace, prepare for war.” 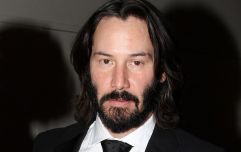 END_OF_DOCUMENT_TOKEN_TO_BE_REPLACED

Which basically sums up the John Wick movies pretty well – John just wants to chill with his dog in his impeccably minimalist house, but first, he’s gonna have to several massive shootouts.

popular
QUIZ: Guess the football stadium from the photo
The JOE Friday Pub Quiz: Week 220
Boxer Ryan Garcia bets $100,000 on Conor McGregor not being able to knock out Jake Paul
QUIZ: Can you complete these classic Alan Partridge quotes?
Kaka calls out Sunday league player who told him to 'cut it back'
People are furious that there are too many Bountys in their Celebrations advent calendar
QUIZ: Can you match the Harry Potter quote to the character that said it?
You may also like
Entertainment
John Wick 5 confirmed to film back-to-back with John Wick 4
Entertainment
Now is the perfect time for a new Matrix film
Entertainment
Keanu Reeves revealed as star of Cyberpunk 2077 via epic cinematic trailer at E3
Film
John Wick 3 is one of the most ridiculously fun action movies in years
Entertainment
Disney reveals Keanu Reeves' character in new Toy Story 4 teaser
Next Page