Justin Timberlake reveals one shot music video for "Say Something"

Justin Timberlake's fifth studio album, Man of the Woods, is due out in a little over a week and JT has now revealed the visuals for new song "Say Something".

Featuring country music icon Chris Stapleton, the video is a free flowing one shot offering that pans as smoothly as the song itself. Directed by La Blogothèque, it follows Justin from the basement of a hollow building decked out in lavish architecture, where he starts the song off building a beat on a drum machine, to the upper floors, using the elevator to help him get about.

With a guitar in hand for most of the video, this is closer to the earthy Justin Timberlake fans might have been expecting when he released the album's teaser earlier in the month. Meeting Chris halfway, the pair then collaborate not only musically but visually too. 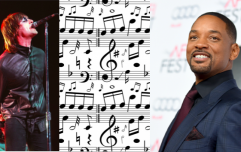 END_OF_DOCUMENT_TOKEN_TO_BE_REPLACED

"Say Something" is a more refined Justin Timberlake. It feels like an organic blend of musical elements. From the Hip Hop-inspired drums, to the country-driven guitar riff, gospel harmonies, and triumphant introspective vocals, you're left feeling satisfied.

Without doubt the best taster he's given us from the new album, this is JT at his best and most honest.