Johnny Depp is being sued for allegedly punching the location manager of upcoming Tupac and Biggie investigation biopic City Of Lies. 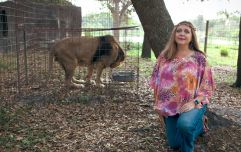 END_OF_DOCUMENT_TOKEN_TO_BE_REPLACED

Variety are reporting that Depp requested that a permit to shoot at an external location be extended beyond 7pm, and location manager Gregg Brooks got it extended to 11pm, but could get it for no later than that time, by which time the permit official said they would need to wrap up the scene.

Brooks informed the movie's director Brad Furman (Lincoln Lawyer, The Informant), who then told Brooks to tell Depp that the crew would need to move on.

At which point, Deep allegedly responded by shouting:

During this, Brooks claims that Depp punched him twice in the ribs, and could smell alcohol on Depp's breath, stating that the actor then shouted:

Brooks states that he was then fired from the movie three days later when he refused to sign a waiver stating he wouldn't sue the production over the incident.

IndieWire has reached out to Depp’s representative for comment, but at the time of writing there was no response.

City Of Lies is due for release in Ireland on Friday 7 September.

popular
End of life 'suicide capsule' machine gets approval in Switzerland
TikTok 'time traveller' claims ‘humans’ lives will change forever on Christmas Day
A definitive ranking of every swear word from worst to best
Arthur Labinjo-Hughes' stepmum 'spiked with salt in prison'
Graham Norton accidentally posts Garfield and Maguire in No Way Home poster in now-deleted Tweet
Arthur Labinjo-Hughes' dad to release body to family for funeral
Juan Cuadrado leads complaints over suspect goal in Colombian promotion clash
You may also like
Entertainment
Sky One will be replaced on our TVs in under a week after 40 years
Entertainment
New Black Panther film officially titled Black Panther: Wakanda Forever
Entertainment
WandaVision Episode 7 answers two of the show's biggest mysteries
Entertainment
Wednesday Addams is getting her own Netflix series
Entertainment
WATCH: The new Mortal Kombat movie goes all in on the fatalities
Next Page