Comedian Jason Manford is best known for making audiences laugh. Now he's warming our hearts after the comic sang Christmas carols for the father of a close friend who had taken ill. 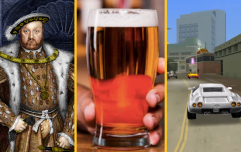 END_OF_DOCUMENT_TOKEN_TO_BE_REPLACED

Going live on Facebook this morning, Manford was stood outside the care home of Mike, father of the comedian's childhood friend Simon, who sadly had suffered a stroke.

With a microphone, keyboard and PA system set up, Manford stepped up to the mic and rattled through a number of Christmas classics, and sounded in incredibly good voice, with friend Simon backing him up on the keyboard.

"My old school friend Simon’s dad has recently had a stroke and is in a local care home," Manford wrote in the Facebook post. "So we’ve come along this morning to sing some Christmas songs.

Mike used to take us to all our gigs when we were teens so it’s the least we could do."

You can watch the video of Manford singing below.

END_OF_DOCUMENT_TOKEN_TO_BE_REPLACED

The comedian was aiming to raise £5,000 for The Children's Adventure Farm Trust, but has now passed that landmark and is hoping to go even further.

"I thought I’d put two of my favourite things together; Christmas songs and The Children’s Adventure Farm Trust," Manford wrote on JustGiving.

"They’ve had such an awful year with not being able to raise money to give children who are terminally ill, disabled or under privileged a holiday and their parents a brief respite.

"I’ve been a patron for many years and have often been there for a child’s first holiday, and very often, and very sadly a child’s last.

"It’s so important to me that this wonderful charity carries on and so I’m raising money to help."

You can go to Jason's JustGiving page and make a contribution here.