Now this is something special.

When Jamie Isaac's new song landed in my inbox I didn't jump on it instantly. However, I regretted that decision once I finally got around to playing it. I got lost in the mesmerising backdrop of "Doing Better" before I even paid attention to the lyrical content and the accompanying video.

The latest single from the young Londoner sounds like something Jamie Woon might have made for his debut album, Mirrorwriting. Why do I think that? It's the swooning production coupled with a key arrangement that sparks something almost unexplainable within your soul.

Then add to it some Frank Ocean-esque effortless vocal delivery that, at times, feels more like a harmonious speaking tone than someone actually singing.

The groove on "Doing Better" is laid back. Its multi-layered structure pairs together jazz, R&B, soul, and Hip Hop music. Instrumentally it breathes deep while lyrically it tussles with being cut deep emotionally and how we often window dress our emotions just to save face.

"I think about the way these words are for display."


Accompanied by a music video directed by Xavier Damase (the same person that did J Hus' "Did You See") "Doing Better", like much of Isaac's music, is designed with the intention to be consumed in transit - in the car, on the bus, walking to work - so the driving through South East London’s nightscape, vibing out concept of the video makes perfect sense. 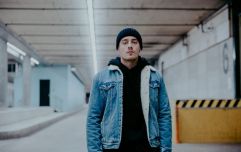 You Should Know... Dermot Kennedy

END_OF_DOCUMENT_TOKEN_TO_BE_REPLACED

Jamie Isaac has also announced shows in London, New York and L.A. in June, including his biggest headline gig to date (London’s Village Underground on June 12th) which should prove an unmissable chance to catch a star on the rise. He will also play support for Nick Hakim on the UK leg of his tour that kicks off on Monday.

Get your tickets here.

While Jamie works on his sophomore album, his debut, Couch Baby, is available to listen to now.