Peter and Warjinder were one second away from winning £60,000

The Chase has responded to viewers absolutely convinced Wednesday night's show was "rigged" and "fixed" so that the Governess would not only win, but deprive contestants of a mighty £60,000 jackpot. 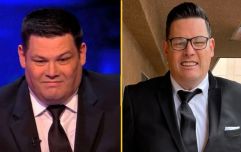 END_OF_DOCUMENT_TOKEN_TO_BE_REPLACED

The apparent controversy centres around a timer, which appeared to slow down, during the final chase.

Regular watchers will know that during the final chase the timer freezes when the last correct answer is given, more astute fans may have noticed that this was the case on Wednesday.

Further, the show is reviewed and adjudicated by lawyers to ensure fair play. They confirmed the above was the case when the Governess answered "Africa" when asked for the native continent of the blue spider.

A The Chase spokesperson said: "Anne gave the final correct answer within the time remaining. The game control system stops the countdown as soon as the correct answer is given.

“This was checked and confirmed by an independent adjudicator. This was explained to the contestants who accepted and agreed with the decision.”

Storm in a teacup or what lads.

popular
New video of Wayne Rooney on night of ‘stitch up’ pics emerges
Conor McGregor deletes disgusting tweet about Khabib's dead father
Man who claims he’s Charles and Camilla’s child is now using his son as ‘proof’
Filipino Olympic weightlifter will be given $660,000 and 2 houses for winning country's first gold
You won't get top marks in this spot the ball quiz
Police find 48TB of 'mostly adult' material in Shilpa Shetty's home after husband's arrest
Coleen Rooney vows to stand by Wayne after semi-naked hotel picture 'stitch up'
You may also like
Entertainment
Shaun Wallace defends 'Dark Destroyer' nickname after people call it racist
Entertainment
Anne Hegerty responds to rumours Philip Schofield is replacing Bradley Walsh on The Chase
Television
Phillip Schofield favourite to replace Bradley Walsh on The Chase
Entertainment
Anne Hegarty left shook by the "worst ever" final Chase
Entertainment
ITV is launching a new quiz show with all five chasers from The Chase
Next Page