Everyone's favourite Hackney- born actor (sorry Ray Winstone), has been rather busy as of late, filming for the new Dark Tower film and getting into shape as a kickboxer.

But in among all the high kicking action, Idris found time to send us all into a tizzy with just a few simple words during a fan Q&A.

END_OF_DOCUMENT_TOKEN_TO_BE_REPLACED

Because while Idris Elba may be Stringer Bell to some and 'that rather good bad guy in the new Star Trek film' to others, for many of us, he made his name (and staked his claim to be the next James Bond) with his turn as grizzled detective DCI John Luther on the BBC.

So when given the chance to ask Idris some questions, inevitability, someone wanted to know if Luther would be back for a fifth series.

@idriselba what's the chance of a new series of Luther ?

To which Idris answered in his typically smooth style. 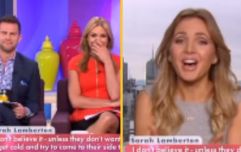 END_OF_DOCUMENT_TOKEN_TO_BE_REPLACED

So there you have it.  There's a BIG chance that Luther could be back for another series of hunting down some very bad and twisted people in some rather recognisable London locales.

After a slightly shortened series four, the idea of more Luther fills us with glee.

Now, if only we can figure out if Ruth Wilson is free to come back as Alice...