In the wake of the sexual assault allegations against Kevin Spacey, the House of Cards production team battled with the question of how to continue the show without it's biggest star. 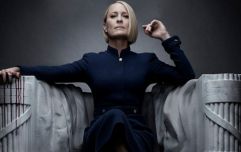 END_OF_DOCUMENT_TOKEN_TO_BE_REPLACED

The decision was made to finish the show after the sixth season and that final season would be built around Robin Wright, who plays Claire Underwood in the hit Netflix series.

Questions remained on how they would build the story in the absence of Frank Underwood, but no more questions remain following the latest teaser of the series.

You should have known. pic.twitter.com/UFGplyDSY1

The video shows Claire standing over Frank's gravestone, taunting him, and speaking directly to camera as Frank did in the opening five seasons of the show.

Netflix also revealed that the final, eight-episode season will debut on 2 November.