It's been a tough year for Hilary Duff on Instagram. 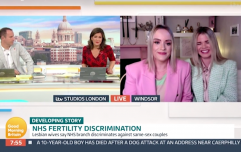 END_OF_DOCUMENT_TOKEN_TO_BE_REPLACED

The actress was accused of cultural appropriation at Halloween because of her outfit and was forced to apologise to offended fans.

The latest snap that Hilary uploaded has seemingly annoyed followers yet again, all because the 29-year-old was pictured kissing her son, Luca.

The mother, actress and singer shared a photo of her and her son at Disneyland, where was seen holding her son and kissing him but what people took issue with was the fact she kissed Luca on the lips.

"I personally just rather keep that difference of romantic and innocent kiss separate",

Hilary thus responded to the trolls posting a message to the naysayers criticising her method of embracing her son.

"For anyone commenting that a kiss on the lips with my four year old is 'inappropriate' go ahead and click a quick unfollow with your warped minds and judgment."