Last year, one of the best movies we endured was Mother!, the Jennifer Lawrence-starring psychological horror that was never meant to be enjoyed. It was a horror movie that is intended to be survived, and the same thing goes for Hereditary. When the end credits begin to roll, you'll be exhausted, relieved, and most likely promising yourself that you'll never watch it again.

We promise not to go too deep into spoilers - we'll leave that for an explanation piece, much like we did for Mother! - but we will talk around the scene mentioned in the headline, if for no reason other than it alone is a piece of cinematic genius.

The trailer cleverly doesn't give too much away, and in terms of overall plot, we'll attempt to feed just as little information: the movie opens at Toni Collette's mother's funeral, as she tells the mourners she never really knew her mother, and also didn't really like her.

She attempts to continue on her life as normal with her husband (Gabriel Byrne), son (Alex Wolff), and daughter (Milly Shapiro), but it soon becomes apparent that there is something not quite right about this family. In a very early scene, we discover that Collette's mother was suffering with a mental illness, and her father and brother both committed suicide, both also diagnosed with forms of schizophrenia.

Collette soon begins to think that her family and her home are being haunted by a presence, perhaps that of her own mother, but is it actually paranormal activity, or is her entire family's apparent predisposition to being mentally unwell beginning to appear in her, too?

To say too much more than that would spoil the surprises the rest of the plot has in store, but we will say this: you WILL be surprised. Anyone who says they see all of the plot twists this movie possesses coming is not to be trusted, because NOBODY could predict the directions this movie is going to take you in. 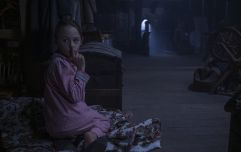 Chilling trailer released for sequel to The Haunting of Hill House

END_OF_DOCUMENT_TOKEN_TO_BE_REPLACED

Admittedly, the early reviews for Hereditary had us very excited - the poster's claim that it was this generation's The Exorcist is quite the claim - but even with all of that, we were still sure we had this movie figured out. There's a recently dead evil granny, an emotional and psychologically fragile mother, a young girl who cuts the heads of pigeons, and a big creepy house. We were sure that no matter how good this movie was, we've seen a variation on it before.

And how wrong we were.

Something happens in this movie, just when you think you've got a grasp of the direction the plot is going, that completely pulls the rug out from under you, informing you suddenly and violently that this horror isn't going to follow the "normal rules" of scary movies.

When the scene is question took place during the press screening, just about every critic there, in almost perfect unison, covered their mouths in absolute shock. Film critics can sometimes be a jaded crowd - they have to watch A LOT of bad movies, and a lot of those bad movies tend to be horrors - and to hear the chorus of gasps escape from them really hammered home just how uniquely brilliant and absolutely terrifying Hereditary actually was.

All of that, and the movie was nowhere near over yet.

Like we said, an absolute endurance test of a movie, and without question the best film of 2018 so far.

You may also like
Entertainment
Watching the scariest film on Netflix
Entertainment
How jump scares took over the horror genre, until now
Entertainment
These are some of the most haunted objects in the world
Entertainment
How to create terrifying horror, by someone who has
Film
Chucky murders Woody from Toy Story on poster for the new Child's Play movie
Next Page