Nothing gets past Harry Potter fans...

In case you missed it, the new trailer for the Fantastic Beasts sequel, The Crimes Of Grindelwald, was released to the world this week.

If you haven't seen it yet, check it out right here:

So did you spot the problem?

If not, we'll help you focus... it happens at the 10-second mark in the trailer, when the Minister Of Magic magics himself into existence at Hogwarts.

And therein lies the problem... 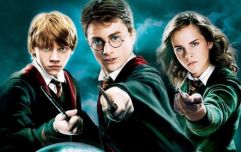 END_OF_DOCUMENT_TOKEN_TO_BE_REPLACED

Yep, magically transporting - or, as it's known within the Harry Potter universe, "apparating" - cannot be performed on the Hogwarts grounds, as there is a magical spell that stops folks from doing it.

And Harry Potter fans did not let this point go unnoticed.

"You can't Apparate inside the Hogwarts grounds, how often do I have to tell you?" - Hermione Granger #CrimesOfGrindelwald #FantasticBeasts pic.twitter.com/p14YeOjfsI

Honestly, David Yates, if you would only read Hogwarts: A History, you would know that you can't apparate onto school grounds... pic.twitter.com/xcJ3yHzi78

However, despite this, some folk have come to the rescue, trying to come up with reasons as to why the previously set rules are now being broken:

Yawn, people keep boring on about the fact you cannot apparate within the grounds of Hogwarts, yet in the #FantasticBeasts trailer they do.

Do you not think events that happened at Hogwarts led to a ban of apparating? A higher security for the protection of the school?

So was it an accidental oversight? Or were we shown it in the trailer for a specific reason, pointing it out as an upcoming plot point?

We'll know for sure when Fantastic Beasts: The Crimes Of Grindelwald is released in cinemas on 16 November.

You may also like
Fashion
An in-depth review of Poundland's invisibility cloak
Life
Ranking the Potter Puppet Pals from least to most vocally proficient
Entertainment
QUIZ: The hardest Harry Potter quiz that you'll ever take (Part Two)
Entertainment
The actor who played Viktor Krum in Harry Potter is absolutely shredded these days
Entertainment
Rupert Grint almost quit playing Ron Weasley after Goblet of Fire
Next Page