Exciting news for people with eyes.

Halle Berry has revealed on her official Instagram account that she will be joining the cast of John Wick Chapter 3 to star alongside Keanu Reeves.

Details about the Catwoman, Die Another Day and X-Men star's role in the upcoming film have not been released as of yet other than the name of her character.

What we do know is she'll be joining Angelica Huston, Asia Kate Dillon, Mark Dacascos, and Jason Mantzoukas, who were all announced by the movie's official Twitter page.

Laurence Fishburne, Ian McShane and Lance Reddick will also all be reprising their roles in the new instalment.


Berry will playing Sofia, according to another tweet and if we had to guess, I'd venture that the Ohio born actress will be some kind of gunslinging, high-heeled assassin that spells trouble for Mr. Wick.

I am Sofia 💋 #johnwick3 | Regram from @halleberry pic.twitter.com/O6RZ5RNFgv 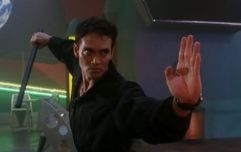 Drive (no, not that one) is the best 1990s action movie you have never seen

END_OF_DOCUMENT_TOKEN_TO_BE_REPLACED

The story will pick up where it left off in Chapter 2, with a $14 million bounty on John Wick's head after he was abruptly excommunicated from the international assassin's guild. Sources say Sofia won't be the villain of the piece, but as we can see from the above post from 'The Continental' hotel, she may well still be a bounty-hunting killer after a prize.

Yeah, we're all very excited too.

The film hits cinemas on the 17th of May next year, in case you couldn't be bothered to decipher the backwards way American people present dates.


popular
Grant Imahara, co-host of Mythbusters, has died aged 49
Clive Tyldesley replaced as ITV's main football commentator
Wesley Sneijder begins training with fifth tier Dutch side, eyeing up top level return
Can you name every English football league club that begins with 'S'?
QUIZ: Identify 99 movies from the 90s by a single image
The JOE Friday Pub Quiz: Week 199
The hardest quiz on The Simpsons that you'll ever take (Part One)

You may also like
Entertainment
John Wick finally blasts the Avengers off their box office perch
Film
John Wick and the man who saved action movies
Film
John Wick 3 is one of the most ridiculously fun action movies in years
Film
A fourth The Matrix film is in the works, says John Wick director
Gaming
John Wick to be made into video game with voices provided by the cast
Next Page