“Do you know what ‘nemesis’ means?”

Despite what the critical consensus might say in 2018, Lock, Stock  and Snatch are still classics. Yes, they are over the top, and completely unrealistic, and completely derivative of Martin Scorsese. But they are just so much fun, and so quotable, and full of great performances.

After Snatch, Guy Ritchie sort of went off the rails. He made the disastrous swept Away with his then-wife Madonna, and followed that with the completely incomprehensible Revolver. He returned to London to make RocknRolla, which was ok, but he’s reinvented himself making Hollywood action flicks like Sherlock Holmes and The Man from U.N.C.L.E. (and King Arthur, which is genuinely fun – no, really!).


His next film is the live-action Aladdin – and god knows how that will turn out. But after that, he’s heading back to the UK. It’s been announce that his next project with be a British set crime movie. 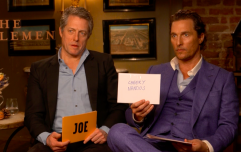 END_OF_DOCUMENT_TOKEN_TO_BE_REPLACED

Ritchie is producing and co-writing the film which has the slightly iffy title of ‘Toff Guys’. According to Deadline, it is going to be a cross between Sexy Beast and Downton Abbey, and is about “a very English drug lord attempting to cash out on his highly profitable empire by selling it off to a dynasty of Oklahoma billionaires”. That's definitely got potential for some cheeky crime japes. Deadline also reports that an insider described it as being “about old money, new money, and show me the money.” Whatever that means.

There is no other details yet, and no hint of who is going to be in it, or when it is going to be out. Still, we definitely hope for a few familiar faces. Jason Statham, for instance, has probably never been better than he was in Snatch. He also worked with Tom Hardy and Idris Elba on RocknRolla before they were megastars, so they’ll be in his phone contacts. And an appearance from Alan Ford – aka Bricktop – would always be appreciated.


popular
The most overrated (and underrated) gym exercises of all time
Who is the most handsome footballer in the Premier League?
Young guys absolutely lose it hearing Phil Collins' In The Air Tonight for the first time
QUIZ: Name every WWF champion from the Attitude Era
Can you guess who Noel Gallagher is slagging off?
Bryan Cranston confirms a Malcolm in the Middle reunion happening this week
The 11 unbreakable rules of making a cup of tea