June Bernicoff has announced that she will not be coming back to Gogglebox following the death of her husband Leon.

When a fan tweeted: “Would you do the show with one of your daughters? X”

June responded: “It was a great adventure with a great finale with the NTA?”

“@ladyshazza27: @LeonAndJune would you do the show with one of your daughters? X” It was a great adventure with a great finale with the NTA😊

Her reply was a nod to the National Television Awards, when Goggleboxers dedicated their Best Factual Entertainment award to her late husband.

Fans were quick to respond to June's decision. 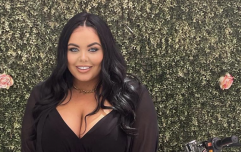 END_OF_DOCUMENT_TOKEN_TO_BE_REPLACED

The Scouse pair were fan favourites on the show.

It read: "Leon's unique personality and sharp wit endeared him to fans of the show, as he contributed fully to Gogglebox's reputation as a programme full of warm humour and unvarnished opinion.

"To those of us that knew him personally, Leon was a man of unwavering principles who exerted a distinct paternal presence both on and off screen. He will be dearly missed by the entire Gogglebox family; cast and crew."

popular
Ricky Gervais finally says what we're all thinking about the Johnny Depp Amber Heard case
Rio Ferdinand and John Terry in Twitter war after controversial 'top 5' pick
Japanese man spends £12,480 to look like a border collie - and it kind of works
New Time Traveller's Wife series airs 'incestuous' oral sex scene that has left everyone divided
Texas school shooter's haunting social media message hours before massacre revealed
Maro Itoje explains why he will no longer sing England rugby anthem
Courtroom erupts in laughter after witness’ Johnny Depp statement
You may also like
Entertainment
Gogglebox sparks Ofcom complaints over X-rated scene between woman and a duck
Entertainment
Gogglebox fans have only just realised the Malones have another child
Entertainment
Gogglebox on hunt for new family following complaints from viewers
News
Gogglebox fans call for ban after Friday episode hit with complaints
Entertainment
Applications to appear on the next season of Gogglebox are now OPEN
Next Page