You're probably aware of his work already

If you're in any way online in the year 2020, you have probably come across the dancing pallbearers. They are the meme of the moment. The techno music, the impeccably dressed pallbearers dancing wonderfully, the idiotic people that they are commemorating. It's a work of art. But where does it originate? 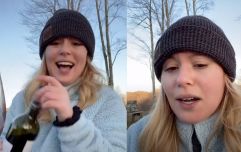 END_OF_DOCUMENT_TOKEN_TO_BE_REPLACED

Since 2003, Benjamin Aidoo has been a funeral director in Ghana. But then the coronavirus outbreak began and Benjamin has become a global viral sensation.

His dancing pallbearers have become a phenomenon, rocking up on every social media platform there is.

As the leader of the Ghanaian pallbearers that have taken over the internet, here’s what he had to say about his journey to meme fame.