A boy who was a baby ten years ago now looks like a ten year old boy.

The episode of Gavin and Stacy where Nessa family gives birth to baby Neil (Series 2, episode 7) aired all the way back on April 20th 2008 – yes, that was ten years ago. That's how time works. 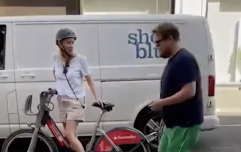 END_OF_DOCUMENT_TOKEN_TO_BE_REPLACED

Anyway, Baby Neil was played by a genuine baby, because presumably him being played by an adult wearing a nappy would have been weird and disorientating. And if you have even the most basic understanding of human biology, you will of course know that babies age and grow into ‘children’. That’s how these things work.

Emily Merchant, the mum of the acting baby that played Neil, recently shared a photo of what he looks now.

He looks like a lovely kid, to be honest. Why not return in another ten years to see what he looks like as a 20 year old?

popular
Multiple fatalities after planes collide mid-air over airport
UK city named the 'most dangerous' in Europe, according to study
Incredible case of the only known individual whose parents were two different species
Mum cuts off boyfriend's 'private parts' after he 'tried to rape 14-year-old daughter'
Man gets full sized Stella tattoo on his head because he loves the drink that much
Pilots fly over destination airport at 37,000 feet - because they were both sleeping
Rachel Bilson says Bill Hader's 'big d***' is the thing she misses most about him
You may also like
Sport
Gary Lineker issues cryptic response to James Corden Match of the Day rumours
Entertainment
Fans are pointing out a hilarious detail about James Corden's The Late Late show announcement
Entertainment
Petition to keep James Corden from starring in new Wicked film hits 25,000 signatures
News
James Corden receives 12,000 complaints after 'racist' segment of Late Late Show
News
James Corden accidentally shares ‘old man in Wetherspoons’ Wayne Lineker meme
Next Page