Far too optimistic for Game of Thrones, surely?

We're only a few episodes in to Game of Thrones' final season, but there's been no shortage of fan theories floating around so far.

But one particular theory about the crypts of Winterfell has captured fans' attention lately - mainly, because they believe it could be real.

The crypts have been one of the most heavily-discussed areas of Winterfell lately.

The most popular theory states that when the Night King attacks, he'll be using his powers to raise the dead Starks within the crypts to attack the living.

Some fans are convinced that this is going to happen because a) it's not totally unlike what the Night King has done before and b) everyone in episode 2 was saying the crypts were safe, which in true Game of Thrones fashion would usually mean the opposite.


But blogger, CUNY professor and Game of Thrones fan Steven Attewell has come up with a theory that everything may actually be alright in the end. 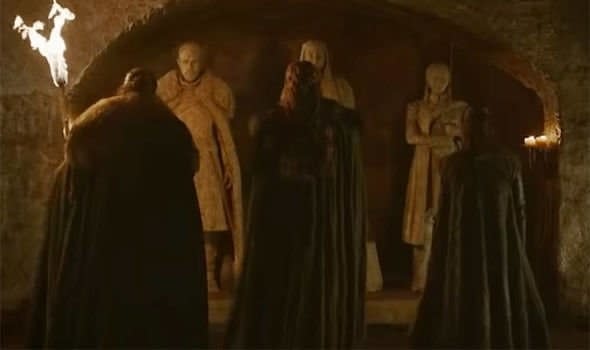 END_OF_DOCUMENT_TOKEN_TO_BE_REPLACED

On his Tumblr page, Race for the Iron Throne, he was asked about what he thought of the theory that the crypts are actually the worst place to be putting the non-fighters, as they're full of corpses which the Night King could reanimate for his army.

And Attewell's answer was surprisingly optimistic, all things considered.

He said: “I don’t think the Starks of ages past, so focused on the coming of winter, buried their dead with iron swords because they were stupid men.

"If anything, I think the Winterfell crypts are [George R.R. Martin]’s spin on the Dead Men of Dunharrow.”

The Dead Men of Dunharrow, from the Lord of the Rings, were a formerly disgraced army of the dead that defended the series' heroes when they needed it and redeemed themselves.

And while there's no Starks in the crypts who would require redemption (at least, as far as has been made in the TV series), Attewell's theory suggests that if  the corpses in the crypts do come back to life, it would be to help the living and fight against the Night King and his army of the undead.

We definitely like the sound of this one - even if it sounds a little too optimistic and hopeful for Game of Thrones.