And this is meant to be a children's show. Sickening.

Peppa Pig is actually some kind of demon and not an adorable cartoon pig, it turns out, after Twitter artist @kwonhanchi has sketched out exactly what the character would look like facing front and centre.

Journey with me now as we descend into the depths of hell.

Ok all fine so far. She looks kinda sweet.

Pretty much the same. Still looks like a cute pig, albeit with a nose that is actually above her eyeballs. That's kinda odd. But still. Not too bad. 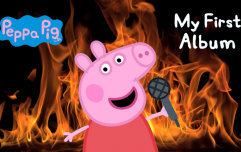 A comprehensive review of 'My First Album' by Peppa Pig

END_OF_DOCUMENT_TOKEN_TO_BE_REPLACED

JESUS CHRIST WHAT THE FUCK IS THAT THING??? KILL IT. KILL IT DEAD. BURN IT ALIVE NOW. BURN IT AND ROAST IT AND EAT IT SO IT CAN'T EVER EVER COME BACK.

She is only ever seen from the side in the 2D programme, and this is probably why, as otherwise she'd look like a terrifying four-eyed four-nostrilled alien life-form sent to haunt the dreams of small children. And adults too actually. This motherfucker is genuinely terrifying.

Just so the image is seared into your mind forever, here it is again, but in colour:

It turns out that most cartoon characters look a bit fucked up when they are turned around, as The Simpsons will be able to tell you.

If you are angry at me for showing you all this, just know that Peppa Peg's mutant face is all I see now when I close my eyes. I have been punished enough already.

You may also like
Sport
Channel 5’s Bellator MMA coverage cuts to Peppa Pig instead of showing the main event
Entertainment
Is Peppa Pig too gangster? We've conducted a thorough investigation
Entertainment
China bans Peppa Pig for chilling reason
Life
Does Peppa Pig give us unrealistic expectations of pigs?
Entertainment
The person who voices Peppa Pig is not who we expected
Next Page