Master Wong is a martial arts expert who specialises in Wing Chun, a variation of Kung Fu

Through his accessible approach to self-defence, Master Wong has built a dedicated following of over 2.3 million YouTube subscribers.

You might be familiar with self-defence and martial arts being taught in specialised gyms, not necessarily out on the street.

But it's outside where you're most likely to deploy your learned martial art. In order to teach us the basics of protecting yourself in public, Master Wong took us to a bar, a side street popular with students and an ATM. The reason for this, Master Wong says, is "because it's more real".

In these situations, you are more likely to encounter a physical attack - which is why Master Wong prefers to stage demonstrations in natural surroundings.

Previous videos Master Wong has published include defending an attack from bodybuilder Roger Snipes. Master Wong is proof that size isn't everything, and he made swift work of the much bigger bodybuilder.

"If you look at somebody, keep an eye on their face all the time. As soon as the hand is moving, you need to step in." 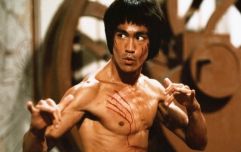 Enter The Dragon is being remade – but can anyone replace Bruce Lee?

END_OF_DOCUMENT_TOKEN_TO_BE_REPLACED

Self-defence is self-explanatory. It's not about being the aggressor - it's more to do with eliminating and avoiding potential threats. Master Wong pays particular attention to the eyes, tone of voice and stance, as indicators of someone's intentions.

Stance also becomes important for your own safety when using an ATM. Standing up right with your feet parallel is not the most protective method, Master Wong says.

Instead, drop your chin down slightly to avoid being choked from behind. In terms of stance, adopt a staggered kind, similar to how you'd stand on a moving train. You are far stronger in this position, and stand a greater chance of getting the hell out of there sharpish.

You may also like
Entertainment
Tekken badass Gary Daniels talks kickboxing, Hollywood and working with Stallone, Chan and Li
Entertainment
The Rock hints that he might play in new American football league he bought
Film
Betting suspended on Tom Hardy becoming next James Bond
Television
The channel that shows Christmas movies 24/7 is launching today
Entertainment
Ryan Reynolds and Rob McElhenney in talks to buy Wrexham AFC
Next Page