The first trailer for Andy Serkis' MOWGLI, a big-screen 3D adaptation of Rudyard Kipling's classic The Jungle Book, has been released and it looks stunning. 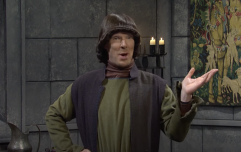 END_OF_DOCUMENT_TOKEN_TO_BE_REPLACED

The movie's trailer shows the many stages of Mowgli's life and all of the animals he comes into contact with growing up in the jungle, including his nemesis Shere Khan (voiced by Benedict Cumberbatch) and Kaa (Cate Blanchett).

MOWGLI follows the upbringing of the human child raised by a wolf pack in the jungles of India. As he learns the often harsh rules of the jungle, under the tutelage of a bear named Baloo and a panther named Bagheera, Mowgli becomes accepted by the animals of the jungle as one of their own. All but one: the fearsome tiger Shere Khan. But there may be greater dangers lurking in the jungle, as Mowgli comes face to face with his human origins.

MOWGLI will be released nationwide on October 19th 2018 by Warner Bros. Pictures.

popular
Graduate sues University for £4m after 'slipping in puddle' at 2am
Amber Heard 'fought really hard' to appear in 'Aquaman 2' despite pared down role
NASA picture of Mars 'doorway' sparking bizarre conspiracy theories
Granit Xhaka rips into Arsenal teammates in brutally honest interview
Boris Johnson slams Jurgen Klopp for defending Liverpool fans booing national anthem
Liverpool fans were right to boo the national anthem
ITV's The Chase star opens up on divorce from ex-wife who is his cousin
You may also like
Entertainment
QUIZ: How well do you remember Nathan Barley?
Politics
David Cameron was written out of Benedict Cumberbatch's Brexit drama for being too boring
Entertainment
The trailer for Brexit film starring Benedict Cumberbatch is…. interesting
Entertainment
Benedict Cumberbatch rescues Deliveroo cyclist from gang of attackers
Entertainment
Martin Freeman reveals the reason Sherlock 'is not fun anymore'
Next Page