For the majority of people, no matter which generation you fall under, Macaulay Culkin is pretty much universally known as Kevin from Home Alone. However, the now 40-year-old actor looks set to take his career in its darkest direction yet. 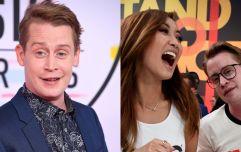 Macaulay Culkin has become a father

END_OF_DOCUMENT_TOKEN_TO_BE_REPLACED

While certainly not as prolific as other recognisable Hollywood faces, Culkin has appeared in more than you'd think: he's just been selective about his films and TV appearances.

On the other hand, he's never taken himself too seriously and did grace us with that clever Google Assitant ad back in 2018. Best put: Culkin has range for days and his next role looks set to prove just that.

American Horror Story is a cult-hit not only in the nation that gifts the show its name but in the UK and around the world too. After several delays due to Covid-19, production on season 10 finally began in October of 2020 and the first images are starting to be drip-fed.

While the title of the AHS season 10 remains unknown, it is believed that it will air sometime in 2021. Better still, who would have ever thought they'd see Macaulay Culkin in American History?

popular
Australian swimming coach's wild celebration goes viral after Ariarne Titmus takes gold
New video of Wayne Rooney on night of ‘stitch up’ pics emerges
Conor McGregor deletes disgusting tweet about Khabib's dead father
Men should ejaculate at least 21 times a month, according to study
Here's how to see who's been taking screenshots of your Instagram Stories
Police find 48TB of 'mostly adult' material in Shilpa Shetty's home after husband's arrest
Man who claims he’s Charles and Camilla’s child is now using his son as ‘proof’
You may also like
Entertainment
'Pigeon Lady' Brenda Fricker says she will be spending Christmas alone this year
Entertainment
Macaulay Culkin reveals disturbing reason he left Hollywood as a child
Entertainment
Just Macaulay Culkin breaking out Home Alone tactics to interrupt a wrestling match
Entertainment
Football fans are confused by the sight of Macaulay Culkin in a West Ham shirt
Entertainment
People can't get over how Macaulay Culkin looks in most recent photographs
Next Page