At some point, they have to stop booking Fergie to sign the US national anthem.

END_OF_DOCUMENT_TOKEN_TO_BE_REPLACED

Whenever the Black Eyed Peas singer (are they still going?) gets booked to belt out the national anthem of the Land of the Free, the backlash floods in like the blood from the elevators in the Overlook Hotel.

It creates a dreadful mess, no one's happy about it and everyone feels just that little bit worse about themselves for having watched it in the first place.

Apparently, Fergie has been butchering anthems for years... pic.twitter.com/wvXEUMgz3v 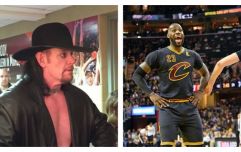 END_OF_DOCUMENT_TOKEN_TO_BE_REPLACED

When the NBA 2018 All-Star game needed a set of pipes to perform those cherished lyrics, someone fucked up by getting in touch with Fergie.

History repeated itself in that Fergie was, well, shite. However, this time around, the shiteness levels of her performance reached uncomfortably high levels.

Whatever the fuck she was going for clearly didn't work. The proof, the reactions of the players on the court and the celebrities in the crowd. Some were confused, others seemed genuinely offended while the majority were cracking up.

Even Charles Barkley couldn't let poor Fergie away with it. He fired back with a zinger during the half-time analysis.

"Damn right it was different. I needed a cigarette after that" - Charles Barkley on Fergie's national anthem 😂😂😂