The actor compared modern Hollywood to the Jimmy-Saville era BBC.

According to The Lord of the Rings star Elijah Wood, the movie business in Los Angeles is racked with child abuse scandals and cover ups similar to the systematic exploitation of children by BBC kids TV show host Jimmy Saville.

"You all grew up with Savile?" the 35-year-old actor asked in a recent interview with the Sunday Times "Jesus, it must have been devastating”.

"Clearly something major was going on in Hollywood. It was all organised. There are a lot of vipers in this industry, people who only have their own interests in mind. There is a darkness in the underbelly."

He went on to add that, "if you can imagine it, it’s probably happened" warning that paedophiles were being protected, often by senior Hollywood figures in the film business.


However, Wood claims to have been saved from the worst of Hollywood's pedophile problem by his mother, who didn't allow him to attend parties when he first became famous.

“She was far more concerned with raising me to be a good human than facilitating my career. If you’re innocent you have very little knowledge of the world and you want to succeed. 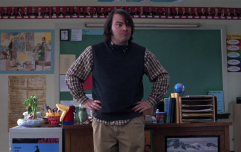 END_OF_DOCUMENT_TOKEN_TO_BE_REPLACED

Wood is not alone is speaking out. Another child star, Corey Feldman, who fronted films like Gremlins, the Goonies and Stand by Me in the 1980s has spoken out about horrific levels of abuse being “surrounded” by abusers who had been “leching around like vultures” since he was the age of 14.

Activist and the co-founder of Bizparents, Anne Henry, claims that Hollywood is sheltering some "100 active child abusers" and is only just now beginning to explore what she called a “tsunami of claims".

"People with parasitic interests will see you as their prey” said Wood.


popular
Jadon Sancho to Manchester United transfer believed to be very close
Antonio Conte likely to leave Inter Milan after just one season
A must-see Jurgen Klopp documentary on Channel 4 this evening
It was Pierre-Emerick Aubameyang's final but Emiliano Martinez's moment
Footballers to be sent off for coughing on an opponent under new rules
The JOE Friday Pub Quiz: Week 202
How to find out which restaurants near you are participating in Eat Out to Help Out

You may also like
Crime
How Harvey Weinstein was brought to justice
Music
Snoop Dogg thanks himself as he gets star on Hollywood Walk of Fame
News
Donald Trump's star 'to be permanently removed' from Hollywood Walk of Fame
Entertainment
Superhero Workout Series: how top film stars get into shape
Quiz
QUIZ: Guess the famous actor from their childhood photos
Next Page