What even is the point of satire like The Thick of It anymore?

Have you seen the crazy Donald Trump interview yet? Yeah, it seems like there is a new clip of Donald Trump doing something mind-blowingly unbelievable, but today’s is some top-tier madness.

While being interviewed by Axios on HBO’s Jonathan Swan, Trump is completely flummoxed when the reporter points out that COVID deaths as a proportion of population is really high in the US, and the President can’t understand why that’s worse than death by proportion of cases.

Donald Trump then starts waggling a load of print-outs towards a bemused Swan, desperately clinging at the last vestiges of American exceptionalism.

It is jaw-dropping stuff, but also a piece of perfectly-paced comedy – it is a scene worthy of The Thick of It, the brilliant political sitcom created by Armando Iannucci – or maybe even its US-based sister-show, Veep.

And yes, because Twitter is full of people who aren’t quite as funny as they think they are all making the same joke, everyone retweeted it say it was like an episode of The Thick of It, and tagging Iannucci asking him if he secretly wrote it.


Iannucci has felt the need to now clarified that he didn’t script it – we say not that anyone really thought that, but it would be a surprise that some QAnon crackpot possibly does believe it.

Woke up today to many people asking me this. I say, with every fibre of my being, ‘No.’ I write fiction. This, sadly, is reality. America, register to vote. Then vote him out. https://t.co/UN7AOHpqef 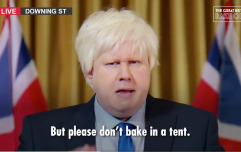 END_OF_DOCUMENT_TOKEN_TO_BE_REPLACED

“Woke up today to many people asking me this,” tweeted Iannucci, in what may be a somewhat exasperated tone. “I say, with every fibre of my being, ‘No.’ I write fiction.”

“This, sadly, is reality. America, register to vote. Then vote him out.”

Earlier this year, we spoke to The Thick of It star Chris Addison and writer Simon Blackwell, who said that the show probably wouldn’t work in our current era of politics.

“Ten years ago, Boris Johnson’s social life would have ruined his career - but he’s done quite well for himself”

The Thick of It star @mrchrisaddison and writer @simonblackwell discuss whether modern politics is beyond satire. pic.twitter.com/6XhDuEaRfn

You may also like
News
All students will be able to go home for Christmas, Gavin Williamson confirms
News
The global Covid-19 death toll has now passed one million
News
Music louder than 85 decibels now illegal in UK bars and restaurants
News
Parliament bars exempt from 10pm curfew and new coronavirus restrictions
News
Former Daily Mail editor to be appointed chairman of Ofcom
Next Page