Hugh Jackman seems like a nice guy. The all-singing, all-dancing Aussie actor was recording a birthday message for an unknown person, because he’s a nice guy like that.

And then he pans across, and Ryan Reynolds, in full Deadpool costume, is lying on the bed, singing ‘Tomorrow’ from the musical Annie.

When you’re trying to record a heartfelt birthday message .... but are interrupted by the least greatest showman. @VancityReynolds pic.twitter.com/RwlE4IXFX1


“When you’re trying to record a heartfelt birthday message …. but are interrupted by the least greatest showman.” 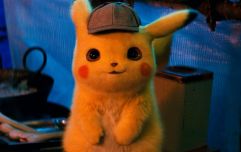 END_OF_DOCUMENT_TOKEN_TO_BE_REPLACED

Of course, Jackman and Deadpool have history together. Deadpool made his first movie appearance in X-Men Origins: Wolverine (ie,the second worst X-Men movie). But then in the first Deadpool, Ryan Reynolds made multiple references to Jackman – even going as far as wearing a Hugh Jackman mask during the finale.

Does this mean we might get a proper Jackman cameo in Deadpool 2? Or is Deadpool going to appear in The Greatest Showman sequel? We can only hope.