Are you a smoker but want to give up the deadly habit? Maybe try Colin Farrell's way...

The 'True Detective' star went down the symbolic route in which he penned a note explaining his decision to give up, before burning it along with his cigarettes.

Farrell explained all in the new issue of Men's Health magazine: 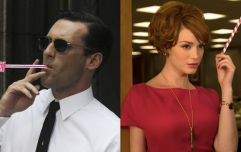 Mad Men but with Pixie Sticks instead of cigarettes

END_OF_DOCUMENT_TOKEN_TO_BE_REPLACED

"I got a frying pan and tossed the letter with a load of tobacco, put some paraffin over it, and lit a match that sent a big, wallowing cloud up into the sky. Then I didn't have a cigarette for another two years."

Guessing he rinsed the nicotine patches in that time too.

popular
Chris Hemsworth criticised for attending maskless party on social media
Ant Middleton dropped by Channel 4, will no longer present SAS: Who Dares Wins
Pontins used list of Irish surnames to keep Traveller families out of parks
Cadbury is bringing out a limited edition Creme Egg flavoured beer
Furlough scheme set to be extended until September
Trainer Gordon Elliot releases statement on photo of him sitting on top of dead horse
Two headlines, one year apart: Has Boris Johnson learned nothing?
You may also like
Fitness & Health
Vegan food blogger claims eating eggs is worse than smoking
News
Vaping is more harmful than first thought, study finds
Entertainment
We now know the place on Love Island that contestants are allowed to smoke
Fitness & Health
Cleaning your house can be 'as bad for you as smoking', study finds
Fitness & Health
Non-smokers should get an extra six days off each year according to a psychologist
Next Page