YouTube star Chunkz has opened up about the weight loss transformation he underwent earlier this year.

END_OF_DOCUMENT_TOKEN_TO_BE_REPLACED

Since June 2020, he has lost 42 kilograms and is now in the shape of his life. Most importantly, he told JOE he feels much better about himself as a result.

He said: "My family kept me going. Whenever I got to see them, it kept me motivated."

Real name Amin Mohammed, he began uploading videos to YouTube in 2015 and has so far amassed 142 million views. Although he has collaborated extensively with others, his channel has over 1.8 million subscribers.

Chunkz is perhaps best known for collaborating with fellow streamer Yung Filly. It was when the two were out filming a music video that the 25-year-old had his 'Eureka moment', whereby he realised he needed to lose weight.

"We went shopping, he [Filly] was roaming around, buying loads of clothes and trying things on.

"I remember I couldn't fit into anything. At the time I was between a 3XL and a 4XL."

Why Chunkz joined the gym 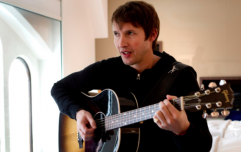 END_OF_DOCUMENT_TOKEN_TO_BE_REPLACED

He remembers looking in the mirror and feeling upset with himself, but this experience was the catalyst for change.

He swiftly enlisted the help of personal trainer friend, Kyle.

"I'd been on loads of diets before and loads of weight loss programmes but you can't stay motivated all the time. It's all about discipline, and Kyle instilled that in me."

Regarding the diets he had attempted but not had much success with, Chunkz said:

"Keto, intermittent fasting, low carb, smoothies, soups... Probably all of them, to be honest."

Taking matters back to basics helped him find a diet that worked.

"Just trying to be in a caloric deficit is the main thing," he said.

"So I make sure I'm burning loads of calories by doing high-intensity interval training, and then I my calories low on my diet. But I have to have enough calories to keep my energy up throughout the day."

"When I wake up, I have three eggs ," Chunkz said, recalling a typical day's diet.

"Throughout the day I'd be drinking loads of water, and then at 12 or 1pm I'd have a meal with chicken breast and veg on the side.

"Towards the end of the day then I'd have some salmon with rice and more veg."

Finding a diet that worked for him was the hardest aspect of his transformation.

"For me it was difficult as a big foodie. I love seasoning and flavours so it was trying to get that in the food as well as to make it balanced."

How he trained to lose weight

Chunkz is working with leading gym chain The Gym Group to encourage those beginning their fitness journeys to embrace the awkwardness of working out for the first time.

He said his training routine changed over the last 14 months, as he became fitter, stronger and leaner.

"At the beginning, I was trying to get rid of a lot of fat so there was a lot of high-intensity interval training and more cardio. A lot of running in the woods, too - 1k or 2k.

As he progressed, he began following a more standardised weight training programme, with specific days for chest, back, legs and so on.

His time in the gym was not without its embarrassing moments, he said.

"I remember one time being on the treadmill, I think my friends were in the toilet at the time.

"There was a guy next to me on the treadmill, he was doing intervals, sprinting full out for 30 seconds then walking for 30 seconds.

"I put the speed up on mine to the same, started sprinting and then ended up buckling and on my knees."

Social media platforms can exacerbate body image issues due, in part, to the filtered nature of pictures. Chunkz used life online as a force for good. however.

"Social media is a big, integral part of my life. Whenever I post pictures of myself now, I'm not trying to get compliments, I'm just showing how I'm looking now with my friends.

"But that [his weight loss] is kind of the thing that people point out."

He recalled a particular picture with Tottenham and England striker Harry Kane.

"I just posted that because it's with Harry Kane, but all the comments were aimed at me saying how much weight I've lost. I didn't expect that so it kept me motivated."

The trio hit the gym together alongside Dapaah's personal trainer as part of the comedian's Belly Must Go series.

Chunkz is working with The Gym Group to encourage young people to 'embrace the awks' by sharing his own awkward moments from his fitness journey.

popular
Metallica finally reacts to Stranger Things 'Master of Puppets' scene
Gary Neville hits out at ‘bullsh*tter’ Rishi Sunak over resignation
Ed Balls and Susanna Reid dance on GMB as protester sings 'Bye Bye Boris'
Bayern Munich not convinced Barcelona will exist in two years, refuse instalments for Robert Lewandowski
Brit on holiday beaten with a brick by gang before being thrown in the sea unconscious
Dad who ran off with Ukrainian refugee says couple are doing 'brilliantly' - but he can't see his kids
Conspiracy theorists believe the world will end today - here's why
You may also like
News
World's fattest cat on mission to lose weight after trolls hit out at owners
Fitness & Health
Tyson Fury's comments on nutrition labelled 'confusing' and 'strange'
Fitness & Health
Tyson Fury claims sport science and nutrition mean "f**k all" in hilarious clip
Life
Shaquille O'Neill shows incredible body transformation and 'first six-pack for 30 years'
Fitness & Health
Britain's strongest man on the 14,000 calorie diet that fuels him
Next Page