In 2019, Chris Martin said the band wouldn't tour until they could find a way for shows to not only be sustainable but 'actively beneficial'

Coldplay has announced an "eco-friendly" world tour that is so Coldplay it will no doubt make critics of the band 'Shiver' - pun very much intended. 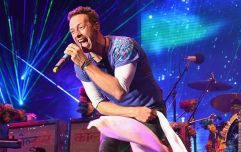 END_OF_DOCUMENT_TOKEN_TO_BE_REPLACED

And we can't be the first to notice this - but it's a little hypocritical.

While the band will use private jets, they'll put fans to work powering their performances.

At the band's upcoming gigs - set to take place throughout 2022 - audiences will be asked to jump up and down to power venues in an eco-friendly way. Coldplay will plant a tree for every ticket sold - and in-venue pedal bikes will generate even more electricity.

"When they move, they power the concert," Martin recently told the BBC.

The 2022 tour will get electricity from batteries fuelled by the power of fans moving within the stadiums. It'll be topped up with solar energy, recycled cooking oil and mains power from renewable resources, as detailed in the same BBC report.

Responding to the idea that fans and the general public may still criticise the band for touring - which itself has other inevitable environmental costs alongside using private jets - Chris continued by saying: "We're trying our best, and we haven't got it perfect. Absolutely. We always have backlash for everything.

"And the people that give us backlash for that kind of thing, for flying, they're right. So we don't have any argument against that."

Coldplay announced earlier this week that their world tour will begin Costa Rica in March 2022.

In 2019, Chris Martin told the BBC that Coldplay wouldn't be touring until they could find a way to not only be sustainable but "actively beneficial." He added: "We would be disappointed if it's not carbon neutral."

However, speaking this week, Chris explained they hadn't yet managed to become sustainable while touring. "In some areas, there's still not enough possible, like how do you get people to a venue without consuming any power? That's still really hard," he told the broadcaster.

Coldplay formed in 1996 and have since sold over 100 million albums worldwide, making them one of the world's best-selling artists.

popular
Billie Eilish confesses to using body double for Coachella festival set
Genius lettuce hack 'puts people to sleep in seconds' - and people swear by it
East London nightclub deaths: At least 22 people found dead in South African 'tavern'
Old George Carlin routine resurfaces after US abortion ruling
'Dinosaur lady' wins internet with baffling Question Time remark on rail strikes
A definitive ranking of every swear word from worst to best
Glastonbury: Watch the incredible moment Olivia Rodrigo and Lily Allen dedicate 'F*** You' to US Supreme Court
You may also like
Music
Chris Martin says Coldplay will stop making music in 2025
Sport
Rob Cross wins the darts, but everyone's banging on about Phil Taylor and Coldplay
Entertainment
You'll never guess what the most festive Christmas song of all-time is, and it's not by East 17
Music
Coldplay guitarist was hit with a beer bottle during Dublin show
Music
Coldplay fan in wheelchair crowdsurfs to join Chris Martin on stage in Dublin
Next Page