Chilling trailer released for sequel to The Haunting of Hill House

We are not ready to be this scared again

It feels like it was years ago that Netflix released The Haunting of Hill House and it absolutely scared the shit out of all of us.

Well, get ready for it all to happen again when The Haunting of Bly Manor arrives.

Coming to Netflix on 9 October, the new season of the anthology series revolves around Bly Manor and the lives of its inhabitants, both living and dead.

Based on the trailer, it looks set to be even more terrifying than the last.

In an interview from last year, director Mike Flanagan warned us that things weren't going to get any more comforting as the show goes on. 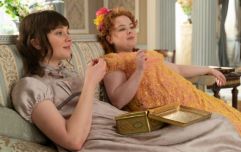 Netflix confirm Bridgerton Season 2 is on the way

END_OF_DOCUMENT_TOKEN_TO_BE_REPLACED

He said: "It’s going to be pretty wild, and for people who aren’t familiar with his work, it’s going to be unbelievably scary. I already think it’s much scarier than season one, so I’m very excited about it."

Take a look at the trailer below and try to remain calm...

popular
The Only Way Is Essex star Mick Norcross dies, aged 57
The JOE Friday Pub Quiz: Week 227
Bernie Sanders memes spread like wildfire after Joe Biden inauguration
People think Jennifer Lopez lip-synced at Joe Biden's inauguration
A definitive ranking of every swear word from worst to best
Make your own Bernie Sanders meme in any location with this website
'Kent variant' of Covid could be 30% more deadly than original strain, PM reveals
You may also like
Entertainment
Netflix announces new true crime documentary about terrifying LA hotel
Entertainment
Netflix has increased its monthly subscription costs for viewers in the UK
Entertainment
Bridgerton streamed by 63 million households in record-breaking Christmas for Netflix
Entertainment
Netflix’s new true crime doc examines one of the most infamous serial killers in US history
Film
PSA: Jurassic Park will leave Netflix on New Year's Day
Next Page