Have you watched it?

HBO and Sky Atlantic's new show Chernobyl has only aired for three weeks in the UK so far, with the mini-series having a total of only five episodes.

But it certainly seems to have struck a chord with fans, since it has managed to secure a higher rating on IMDb than Planet Earth 2, Breaking Bad and Game Of Thrones.

Chernobyl has become the top rated TV show on IMDb with a rating of 9.5 while over on Rotten Tomatoes, it also holds a rating of 96%. 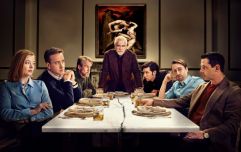 END_OF_DOCUMENT_TOKEN_TO_BE_REPLACED

Chernobyl talks about the early hours of 26 April 1986, when a safety test on a reactor at the Chernobyl power plant in the Soviet state of Ukraine went catastrophically wrong.

Detailing the 1986 disaster, HBO and Sky Atlantic's five-part mini-series dramatises the story of the nuclear accident, considered to be one of the worst man-made catastrophes in history, and the sacrifices made to save Europe from an unimaginable disaster.


popular
QUIZ: Identify which European clubs these 20 badges belong to
THE JOE FRIDAY PUB QUIZ: WEEK 174
Why is Conor McGregor’s whiskey called Proper 12 and sponsoring UFC 229?
Tickets for UFC London are about to go on sale
QUIZ: Can you guess the pixelated movie posters?
Three lads managed to sneak into the $80,000 front-row seats at the McGregor fight without tickets
This is how much time most men need after orgasm before they're ready for another round