Bryan Cranston - loved the world over as both Walter White from Breaking Bad and Hal from Malcolm In The Middle - will be lending his talents to an upcoming 10-part Channel 4 series.

The sci-fi series, called Electric Dreams: The World of Phillip K. Dick, will run for 10 episodes - each of which will be a standalone drama based around Dick's work.

Speaking about the project, Cranston said: “This is an electric dream come true. We are so thrilled to be able to explore and expand upon the evergreen themes found in the incredible work of this literary master.”

Phillip K. Dick is regarded as a legend of the sci-fi genre; his novella The Man In The High Castle was recently adapted for screen by Amazon Prime. 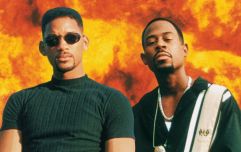 Test your film knowledge with our JOE movie quiz

END_OF_DOCUMENT_TOKEN_TO_BE_REPLACED

Dick's work has also served as the inspiration for other classic sci-fi films such as Blade Runner, Total Recall and Minority Report.

The series will be co-produced by Ronald D. Moore, who was responsible for the Battlestar Galactica reboot as well as Star Trek.

popular
Uproar over VAR decision to rule out Ollie Watkins' equaliser against West Ham
A definitive ranking of every swear word from worst to best
People who refuse COVID vaccine could be banned from football matches and the cinema
Moderna vaccine trial shows 100% efficacy in dealing with severe Covid-19 infections
Troy Deeney criticised for comments on David Luiz's collision with Raul Jimenez
Rita Ora apologises for hosting lockdown-breaking birthday party in London restaurant
QUIZ: Fill in the missing club from these players' career paths - Part 6
You may also like
Entertainment
Bryan Cranston says he'd play Walter White again 'in a second'
Television
Bryan Cranston confirms a Malcolm in the Middle reunion happening this week
Entertainment
Jesse Pinkman is back in the trailer for El Camino: A Breaking Bad Movie
Entertainment
Bryan Cranston and Aaron Paul release mysterious possible tease for the Breaking Bad movie
Film
One of Bryan Cranston's best perfomances is now on Netflix
Next Page