As scary as Gleeson has ever looked

When the first trailer for The Comey Rule dropped and we got a sneak glimpse at Brendan Gleeson as Trump, we were a little bit taken aback.

We weren't surprised that he was able to nail the voice, but it was still somewhat startling to see.

And this new trailer isn't any different.

Once again, Gleeson steals the show, coming across as absolutely terrifying with every line that he says, and coming as close to spot on as possible with regards to the iconic voice. 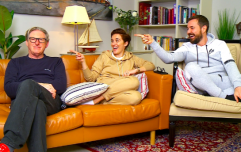 END_OF_DOCUMENT_TOKEN_TO_BE_REPLACED

The Comey Rule is set to air on Showtime on 27 and 28 September, and also stars the likes of Jeff Daniels (as Comey), as well as Holly Hunter, Scoot McNairy and Michael Kelly.

There are no details yet about where the show will be syndicated in Ireland or other countries, but we definitely have our fingers crossed.

The series is based on the book A Higher Loyalty, a memoir written by James Comey — the FBI director who was fired by Donald Trump whilst in the middle of investigating the matter of his collusion with Russia during the 2016 presidential election.


popular
Liverpool fans raise £100k for food banks with boycott of Sheffield United PPV
QUIZ: Name the films referenced by The Simpsons
Newcastle United sign bricklayer mate of Allan Saint-Maximin... no, really
Paul Pogba has announced his retirement from Dabbing... and revealed its replacement
You'll have to be an old-school fan to get 20/20 in this 1990s footballers quiz
QUIZ: How well do you know The Simpsons' famous softball episode?
The JOE Pub Quiz: Week 214