So it looks like he will be appearing after all...

Behind the scenes footage of Ant McPartlin has been released by Britain's Got Talent producers ahead of his return to the show this weekend. 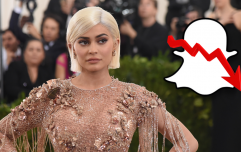 END_OF_DOCUMENT_TOKEN_TO_BE_REPLACED

Despite being in rehab it is believed the 42-year-old will be seen on screen next week, as the show's auditions were filmed before his recent arrest for drink driving.

In the Snapchat videos, filmed backstage during the pair’s tour of the country, Ant looks happy and well. He is seen having a laugh and joke with the show’s cast and crew in the footage.

It is likely that Dec will front the show on his own once it gets past the auditions stage, whilst his on-screen partner recovers in rehab.

Over the weekend, Dec presented the show alone. “It’s been a fun series. It’s been tinged with sadness,” he told the crowd after filming.

An audience member then shouted out “We miss Ant.”

To which Dec replied “Yes, we do [miss him]. Give a round of applause to Ant who’s back home.”

popular
Machine Gun Kelly stabbed himself in front of Megan Fox to look cool
Horrifying footage shows cop fatally shoot man in wheelchair 9 times
Arsenal score bizarre goal against Man Utd with David de Gea down injured
Arthur Labinjo-Hughes: Dad and partner found guilty of killing boy who was tortured and starved
Freddie Flintoff wants Jeff Bezos to send him to space to prove Earth's not flat
Frank Lampard admits he 'felt terrible' over comments he made about Paul Pogba
Prince Andrew 'flew with sex slave' who was 'frozen with fear', court told
You may also like
News
University withdraws student offer over racist abuse of England players
News
Mum Snapchats herself hitting M60 at 88mph - has horrific crash
News
Influencers divided on Norway's new law on photo editing
Tech
You can now delete messages on Snapchat, here's how
News
Snapchat are finally ditching the update that everyone hated
Next Page