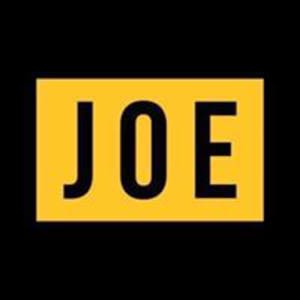 Bandersnatch: behind the scenes of the Black Mirror epic

Bandersnatch stars Will Poulter and
Fionn Whitehead explain to JOE the
massive challenge of starring in
Netflix’s interactive movie.

As you are probably aware by now, Bandersnatch is no ordinary episode. Plot-wise, a 1980s teen computer programmer getting freaked out by a haunted video game might be Black Mirror by the numbers, but the story wasn't what caused the buzz around its release. It was unique for being billed as an 'interactive' movie.

Much like a Choose Your Own Adventure book, at certain points the viewer is offered a choice over what happens next.

Some are as simple as what breakfast cereal the protagonist eats; others have more serious implications, like whether the lead character should commit an act of extreme violence against a family member. But it is all these decisions that determine which of the film’s multiple endings you see before the credits roll.

Even watching it can be a mind-bending experience. So for Fionn Whitehead, barely out of his teens and playing his second big role after joining the ensemble cast of Christopher Nolan’s Dunkirk, taking up the part proved a steep learning curve.

"There was a paper copy, but that paper copy was incredibly complicated and hard to understand," says Fionn, who stars as Stefan Butler, the troubled teen whose life begins to falls apart as he attempts to code an ambitious interactive adventure that shares the episode's title.

"When you got to a choice point, you would then have the choice points listed, so it wouldn’t run as a story."

"It wasn’t even readable as a Choose Your Own Adventure book," adds Will Poulter, who plays Colin Ritman, the cocky wunderkind programmer who introduces Stefan to mind-altering drugs.

"You couldn’t necessarily go back to see where your choice led you. It was less helpful than that."

Will Poulter stars as Colin Ritman.

Will Poulter stars as Colin Ritman.

The cast were given the script in the
form of a Twine document.

A fully working model of Bandersnatch had to be built in the programme before even a frame of footage was shot.

Unless you are an amateur programmer, you’ve probably never heard of Twine. First developed in 2009, it is an open-source programme used for the creation of interactive fiction. It has become an essential tool in the indie game development scene, being used for innovative titles like Depression Quest.

"The software just goes way over my head," says Whitehead, admitting there were difficulties for the whole cast.

"Really, the only way to approach the project was to do a Twine document and then refer to the script for reference once we started shooting."

Poulter even says that he didn’t truly understand the episode until he watched the final product. "[Twine] was so helpful in terms of getting a rough idea of what was going to be in practice," he adds.

"But really and truthfully, it was only when I stepped into the shoes of the viewer and watched it back, that I really was able to see it, and realise what the experience offers people."

Bandersnatch presented a unique challenge to the actors. Though most films aren’t shot chronologically, usually actors will know where their character is in their head at any given point in the narrative. But there were a variety of things that could or could not have happened to them when they were shooting.

"On the set, it often became hugely confusing and very daunting," says Poulter.

"The task of managing your own character arc, and grappling with the physical and emotional continuity of it."

Whitehead also found the role difficult due to the unusual format: "For me, it really came down to taking it one day at a time, one scene at a time and going into detail about that scene you are shooting at that moment. Stefan sometimes becomes more aware, sometimes less aware, depending on what you chose. It is very confusing.

"It was really just playing it with the foundations of the character that I had already formed.”

"One of the frustrating aspects to shooting this was the slight differences that you had to include in order to accommodate the different choices," adds Poulter. "It became very difficult to remember between versions where those slight changes would take place.

"Particularly after a long day when you’ve shot it from a hundred angles."

This is not the first time somebody has tried to make a Choose Your Own Adventure-style film. There were several clunky CD-ROMs from the 1990s and modern games like Heavy Rain and Until Dawn work on a similar idea.

In fact, it would be easy to see Stefan as an avatar for the viewer – much in the same way many video game protagonists serve as blank slates onto whom the player can project themselves as they interact with the game world. But Whitehead fundamentally disagrees, describing Bandersnatch as a "very different beast" to a game.

"I’d argue the difference with this is that you are not experiencing the world through [Stefan], you are affecting him directly. As opposed to passively following him, what you are really doing is playing God.

"It’s a way of giving people this god complex."

"[If] you make a choice that in everyday life you would choose, it actually ends the story very quickly," explains Poulter. "What that serves to do is encourage people to think outside the box – to go in a more exploratory way of thinking. It encourages people to be a bit anarchic."

Black Mirror has a very enthusiastic fan base, poring over the smallest of details about the show on Reddit and other social media platforms. And Bandersnatch has only caused the show's popularity to surge as people try to figure out how to ‘complete’ the film or get the ‘proper’ ending.

Sadly though, Whitehead has bad news for them.

"We talked about that exact thing when we were filming," he says, spoiling a whole load of fan theories in the process. "Often with Choose Your Own Adventure books there would be different choices you could make, but ultimately only one real ending.

"Whereas for this, there are multiple different endings for how the characters turn out – that was something [director] David Slade really wanted.

"They are all the real endings."

As far as the show's cast are concerned, you will just have to make your own decision on Stefan's fate.