ALERT: This article contains jokes about spoilers that we can neither confirm nor deny

It must be tough for Avengers stars discussing their fate ahead of one of the biggest film releases of all-time, and Chris Evans is taking his own particular approach to spoilers.

END_OF_DOCUMENT_TOKEN_TO_BE_REPLACED

Ahead of the release of Avengers: Endgame, the 37-year-old Captain America actor appears to be intent on winding up fans by joking about his character's death.

"Yeah, I wish I could," he told Hollywood Reporter when asked if he could reveal the ending. "It's — I mean — it's a good one. It's a real good one. I saw, like, the first hour of it."

We can all remember Tom Holland's not-so-careful treading of the line when it came to not revealing Spiderman's fate in Infinity War and Evans' comments may or may not be a warning in themselves.

"Right, exactly," Evans joked after being asked if he stopped watching when Captain America dies.

END_OF_DOCUMENT_TOKEN_TO_BE_REPLACED

"After I die by Tony's hand, I just said, You know what? I can't watch this.

"I can't believe they even cut together a trailer, because so much of it is a visual spoiler. You'll see. A lot of the characters have — probably shouldn't have even said that."

In summarising Endgame, Evans made clear that it is "really good", but how do we know that wasn't a joke too?

"This one's really good," he said. "I choked up like three times." 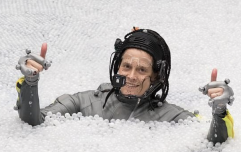 END_OF_DOCUMENT_TOKEN_TO_BE_REPLACED

Again, the prospect of Captain America dying came up, to which he replied: "Right. It's hard. Seeing my own death [laughs].

"It's going to be a long movie, that's for sure. The first edit clocked in over three hours. My funeral's like an hour."

On the matter of retiring from acting now Avengers has come to an end, Evans was clear that he was never intending on finishing up just yet.

"I never said the word 'retire'," he stated. "It's a really obnoxious notion for an actor to say they're going to retire — it's not something you retire from."

popular
Noel Gallagher branded 'vile' by disability charity after Glastonbury comments
British schoolboy breaks internet after attending prom in sequined tuxedo ballgown
Nick Kyrgios to appear in court after being charged with domestic abuse
Dominic Raab may just have delivered the 'car crash interview of the year' over Chris Pincher scandal
A new £1 hangover prevention pill has gone on sale in the UK today
Albert Riera forced out of first Olimpija Ljubljana press conference by club ultras
Wildlife trophy hunter who killed lions and elephants gunned down in 'execution-style' murder next to car
You may also like
Entertainment
Tom Hanks reveals the one scene in Forrest Gump he had a problem with and it will surprise you
Entertainment
Christian Bale says he will play Batman again under one condition
Entertainment
Johnny Depp responds to Pirates of the Caribbean return rumours
Entertainment
Top Gun: Maverick soars past $1B at box office to become highest-grossing film of Tom Cruise's career
Entertainment
The JOE Friday Pub Quiz: Week 300 - the Triple Century
Next Page