'It’s a message. From the Night King.'

END_OF_DOCUMENT_TOKEN_TO_BE_REPLACED

After presumably seeing all of his friends and family murdered at Last Hearth, the leader of House Umber was then killed by the Night King, pinned to the wall via a gigantic stake, and then reanimated as a wight.

However, Ned's death isn't in vain because that wonderfully horrific scene has encouraged another debate about those mysterious symbols that the White Walkers have been leaving.

On that note, here's a deep dive about the symbols, where they've appeared, what the creators have actually said about them, and some of the more plausible theories.

Again, nothing official has been confirmed about their significance, but they're clearly important to the overall story and they're very interesting.

In the very first episode when the Rangers of the Night's Watch get absolutely slaughtered beyond The Wall. 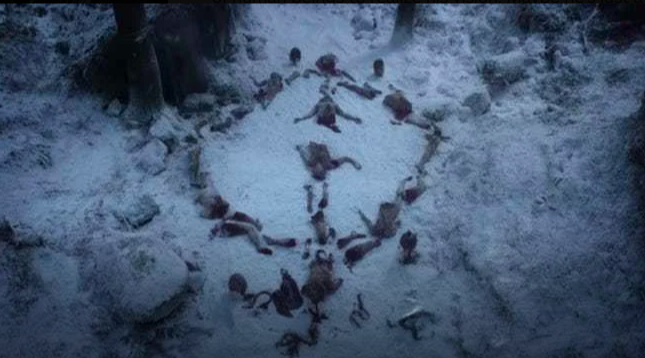 At the Fist of the First Men when Jon, Mance Rayder, and a bunch of Wildlings discover the severed remains of a few horses arranged in a spiral pattern.

"Always the artists" is what Mance says, implying that he has seen these patterns before. 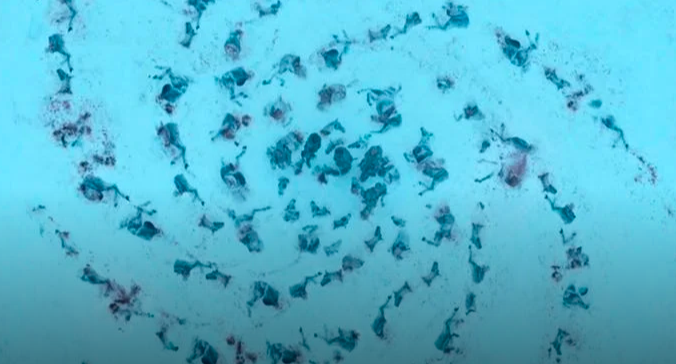 When the Children of the Forest were creating the Night King by pushing a shard of dragonglass into his chest, the pattern emerged once again.

Later in that same episode, Bran touches the roots of the weirwood tree without the aid of the Three-Eyed Raven. Bran then travels to a snowy version of this scene, where the Night King has assembled his army.

This is the moment that the Night King touches Bran's arm. 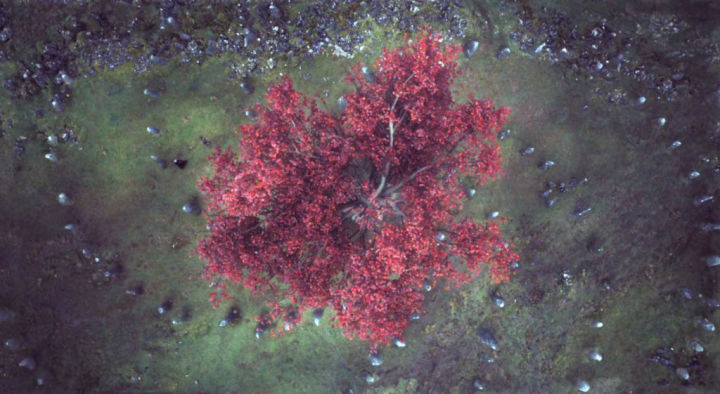 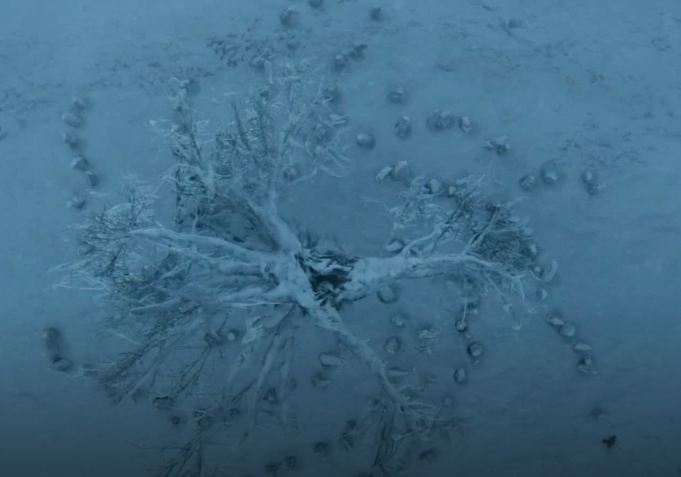 When Jon and Daenerys were in the caves of Dragonstone, Jon explained the history of the Children of the Forest and The First Men to Dany.

Eventually, they were defeated - we think a pact was agreed - and moved beyond The Wall.

In the most recent episode, Ned Umber was pinned to a wall with severed limbs arranged in the spiral pattern. 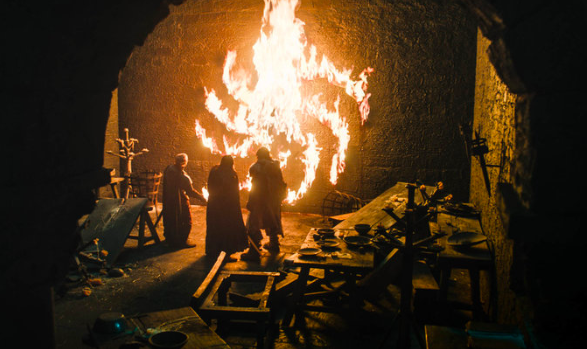 What the creators and cast have actually said about them...

Speaking after the fourth episode in Season 7, the Game of Thrones showrunners have said: "There are certain symbols and patterns that recur throughout the show. The first time we saw that was in one of the very first scenes in the pilot, when Will the ranger sees the wildling body parts in an odd pattern displayed by the White Walkers".

Here's their interview in full.

In an interview with the Huffington Post, Richard Dormer (Beric Dondarion) has also spoken about the symbols and how they connect to the most recent scene at Last Hearth.

Of course, Beric was the man that discovered Ned Umber's body pinned to the wall and he did the young Lord a kindness by giving him a fiery death.

“I overheard somebody say, ‘Is it the symbol of the Lannisters? That spiral?’ The spiral means something. It’s the thing that they leave everywhere, so you can read into that in the universe. It’s the universal building structure of life, like, you know, spiral galaxy, swirling coffee, the way water goes."

“I think [it’s] George R.R. Martin being very clever on a subconscious level, dipping deep into the human psyche, and we’re probably not even going to know why they do that. I think that’s genius. It makes us think really deeply about images and things, and it just opens up the whole world.”

When asked if the symbol could represent time, or a time loop, Dormer said, “That’s what I’m talking about. It’s like a spiral, a continuum, a thing that is eternal. That is all around us.”

What the spiral pattern - and the circle with a line through it - could mean...

In Celtic mythology, a triskele is extremely popular as the symbol consists of a triple spiral exhibiting rotational symmetry. It's very similar to what we've seen in Game of Thrones. 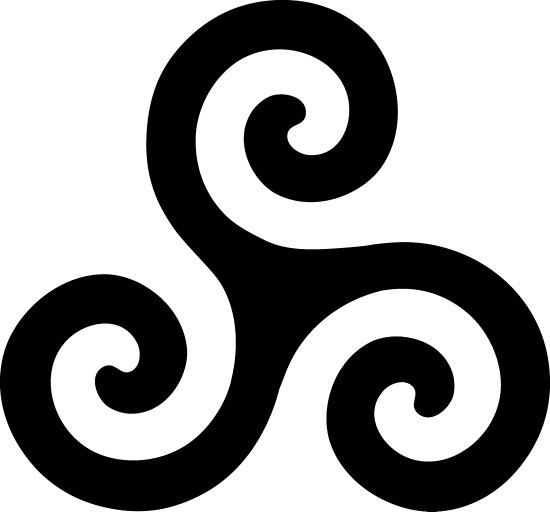 On a personal level, George R.R Martin had a Celtic-style wedding ring, his mother has Irish heritage, and he has even said that the map of Westeros is based on an inverted map of Ireland.

It's not a massive leap to imagine that he has been inspired by Celtic mythology. The 'A Song of Ice and Fire' is a melting pot of various mythologies, histories, and books.

The triskele can be thought to represent motion as all three arms are positioned to make it appear as if it is moving outwards from its centre.

The three arms of the triskele can be interpreted in a variety of different ways too.

It is believed to represent a tale of forward motion to reach understanding.

On this note, it's worth stating that George R.R Martin was a conscientious objector to the Vietnam War and various cast members have said that the ending of Game of Thrones is "bittersweet".

We've previously elaborated on the idea of a pact between the White Walkers and the First Men, and how Game of Thrones won't be settled by a bombastic battle of blood, gore, guts, and glory.

Essentially, George R.R Martin and the showrunners have been incredibly clever in using this symbol because it represents so many things.

Keeping it Irish and you may know that the Game of Thrones showrunners, Dan Weiss and David Benioff, became close friends when they were studying Irish literature in Trinity College in 1995.

We're making a leap here but it's almost a certainty that they studied W.B Yeats' "The Second Coming" and understand how important the concept of a gyre is.

Yeats imagined time not as a line, but as a spiral. As a symbol, the gyre characterises history as both progressive and repetitive - almost like the nature of war, something that George R.R Martin is completely against.

In fact, you can read Game of Thrones as a treatise on the heartbreak, loss of life, and redundant nature of war. 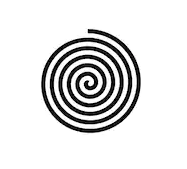 The spiral is a calling card of the Night King's army - Every House in Westeros has a symbol, could it be something as simple as the Night King's sigil? After all, the Night King was just a dude that got sacrificed by the Children of the Forest. He remembers the stone pattern that was surrounding the tree where he was sacrificed. Maybe the symbol is his way of telling people that he remembers the shit that went down and he's coming to fuck them all up.

The spiral represents a Targaryen sigil - They do have some similarity but we'd be amazed if this is true. House Targaryen adopted its current sigil only some 300 years ago when Aegon Targaryen I conquered all of Westeros and established the unified political entity known as the Seven Kingdoms. Unlikely given the timeframe but interesting.

The 'eight kingdoms' of Westeros - Some people have claimed that the eight strands of limbs spreading out from Ned Umber's body could represent a 'secret' Kingdom of Westeros. Perhaps 'The Land of Always Winter' want to be represented as one of the major players. Unlikely.

Time is a circle - as stated previously, this seems to be the most plausible one and it's that events of the past are doomed to repeat themselves.

As is the norm with every mystery in Game of Thrones, we'll have to wait and see what the future holds.

The White Walker spirals & the Targaryen symbol look so much alike. Rhaegar is indeed the night king. #GameofThrones pic.twitter.com/dpfRhDNGVs