He's much maligned, but for me, he's the best character on Friends

Prior to writing this article, I did a quick survey in the office to find out who everyone's favourite character in Friends was, and the results surprised me.

There was a lot of love for Chandler and Joey, and to a lesser extent Rachel and Monica, but there were only a handful of people who claimed that their most loved character was Ross.

Phoebe did not poll well in the JOE offices.

I know it's difficult to pick a character over the entire ten seasons of Friends because each character has their moments. But despite a rocky opening to Ross's time in the show where he was portrayed as a bit of a downer and a moaner, he came back strongly in the middle and later seasons.

He continues on to be the most underrated character in the series. His humour is completely different to Chandler, who is self-aware, whereas Ross humour comes from the fact that 90% of the time he doesn't know what's going on and is caught completely by surprise.

Therefore his humour is not forced but rather genuine, which makes it that little bit funnier.

The One With The Stripper (Season 8, Episode 8)

The bit where Ross is confronted by Dr Green (Rachel's dad) about getting her pregnant, in front of his then girlfriend, Mona.

The One with All the Resolutions (Season 5, Episode 11)

Ross's New Year's Resolution is to do something he hadn't done before, every single day. So he decides to buy a pair of leather pants. But this probably wouldn't have happened if Chandler had been allowed to tell jokes at the time.

Ross: *While tugging on pants after putting powder on his legs* "They're not coming on, man."


Ross has Joey, Rachel and Charlie around for food and drinks. And he's actually fine... 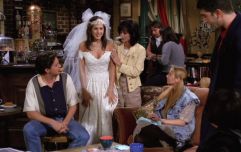 QUIZ: How well do you really remember the first episode of Friends?

END_OF_DOCUMENT_TOKEN_TO_BE_REPLACED

"The V is for this... very surprising turn of events. Which I am still fine with by the way."

"E is for how... extremely normal I find it... that you two are together."

Ross tries to move in his new couch.

Ross: "You sprayed my front twice!"

Ross: "No, I barely even got to three Mississippi."

The One with Ross and Monica's Cousin (Season 7, Episode 19)

The One With The Birthing Video (Season 8, Episode 15)

Mona finally breaks up with Ross, and the scene with Joey is pure gold.

Ross: "I didn't tell her I got Rachel pregnant."

"I gave her a key to my apartment and then had the locks changed."

"Then I lied to her about Rachel moving in with me."

"In a way, I judge her for not breaking up with me sooner."

The One With Phoebe's Birthday Dinner (Season 9, Episode 5)

Ross: "A pigeon, a pigeon. No, no wait, no, no, an eagle flew in. Landed on the stove and caught fire. The baby, seeing this, jumps across the apartment to the mighty bird's aid. The eagle, however, misconstrues it as an act of aggression and grabs the baby in its talons. Meanwhile, the faucet fills the apartment with water. Baby and bird still ablaze are locked in a death grip, swirling around in the whirlpool that fills the apartment."

Rachel: "Boy, are you gonna be sorry if that's true."

The One with Ross's Sandwich (Season 5, Episode 9)

Somebody steals Ross's sandwich in work. You know the one with the extra slice of gravy-soaked bread in the middle, called the Moist Maker?

Ross:" You're sleeping with my sister?"

Joey: *Covering for Chandler* "It was only for one night. It was when we were in London."

Ross: "This is not good for my rage."


popular
PlayStation and Xbox users will now be able to play against each other online
QUIZ: Can you identify these world cities on a map?
Former Brazil striker Alexandre Pato linked with a sensational return to English football
The Great British Bake Off slammed for 'ignorant and racist' Japanese Week
QUIZ: Can you guess the drink from its can?
Manchester United set to 'offer Hakan Çalhanoğlu five year contract'
A definitive ranking of every swear word from worst to best

You may also like
News
UK government ridiculed for using 23-year-old Friends reference in coronavirus PSA
Quiz
Personality Test: Which Friends character are you?
Entertainment
The definitive ranking of all six Friends from worst to best
Entertainment
QUIZ: Name the TV show from the end credits production logo
Entertainment
Jennifer Aniston's latest comments seriously tease a Friends reunion
Next Page