It's a sad day for nostalgia as Microsoft's Internet Explorer is set to be killed off after 27-years of outstanding service. 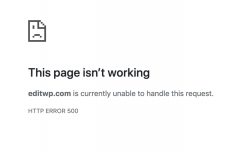 END_OF_DOCUMENT_TOKEN_TO_BE_REPLACED

Having debuted in 1995 as the built-in browser for Windows 95, Internet Explorer was, for a time at least, the only browser people turned to while on the web.

Internet Explorer (IE) has not received an update since 2013 and has been largely irrelevant since the introduction of Microsoft's Edge browser. That being said, did anyone really use IE once there were other options?

Microsoft announced that Internet Explorer is shutting down after 27 years on June 15, 2022#InternetExplorer pic.twitter.com/sP1UInXloJ

Internet Explorer has been trending on Twitter throughout the day, and many have shared their condolences.

"Internet Explorer to be finally shut down by Microsoft after 27 years. Thank you for helping us download other web browsers," wrote one user.

After 27 years, Microsoft will officially be shutting down Internet Explorer starting Wednesday of this week. pic.twitter.com/A8XMKIKQg1

A third commented: "Anybody who thinks IE11 is actually dead tomorrow:

"Get a job in SMB or large enterprise IT and/or, Poke in Windows internals tomorrow and see how dead it isn't.

Internet Explorer is retiring on Wednesday after 27 years of service. pic.twitter.com/ItNmJ4RJ1v

popular
Jurgen Klopp reacted like everyone else to Darwin Nunez headbutt red card
Incredible case of the only known individual whose parents were two different species
Landlord faces £40k fine after tenant puts swimming pool on roof of flats
Bulgarian mystic who correctly predicted Princess Diana’s death and 9/11 sees 2022 prophecy come true
Angry woman confronts blind man at gym and accuses him of starting at her
Moment Jake Paul ends up in dramatic fight with YouTuber in club
Graeme Souness under fire for calling football a ‘man’s game' while sat with Karen Carney
You may also like
Entertainment
Technoblade: YouTuber announces his death, age 23, with 'so long nerds' video after cancer battle
Life
Instagram’s pornbot problem was driving me mad - so I became one
Life
Elon Musk claims he's being threatened by Russia over supplying internet to Ukrainians
Entertainment
YouTuber has license revoked after faking plane crash for clicks and likes
News
Facebook allows children into metaverse strip club
Next Page