Zlatan Ibrahimovic to appear as guest on 'Jimmy Kimmel Live!' next week

Zlatan Ibrahimovic made quite the impression on his LA Galaxy debut the other week.

Not only did he draw his new club level in the Los Angeles derby with an absolute worldie, he then went and nodded home a winner in stoppage time. 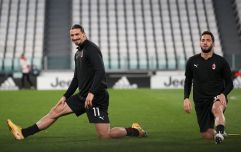 END_OF_DOCUMENT_TOKEN_TO_BE_REPLACED

'You're welcome, Los Angeles', and all that jazz...

A month on from completing his move to California from Manchester United, it's now been announced that the Swede is set to appear as a guest on popular talk show Jimmy Kimmel Live!  next week.

The news was shared by LA Galaxy's website on Friday, explaining that their new striker would be joining LL Cool J as one of the guests next Tuesday. Obviously, this will air when most of us on these shores are in bed, but we can say with absolute certainty that we'll be hearing about it when we wake up.

Since his debut heroics, Ibrahimovic has made just one further appearance for his new team but was unable to prevent them losing 2-0 at home to Sporting Kansas City. He's expected to feature again on Saturday as the Galaxy travel to Chicago Fire - where he'll more than likely face former United teammate Bastian Schweinsteiger - before returning to LA to face Atlanta United a week later.