Ibrahimovic, who completed his move from Manchester United to Major League Soccer's Los Angeles Galaxy recently, played the part of an arcade fortune teller during a sketch - delivering some brutally honest answers to Corden's questions... 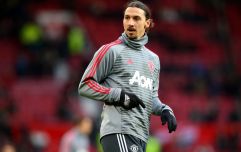 END_OF_DOCUMENT_TOKEN_TO_BE_REPLACED

The 36-year-old former Swedish international not only describes himself as the "greatest soccer player in the entire universe" during the sketch, but also explains that he us unrivalled when it comes to fortune telling, multi-tasking and, err, being sexy.

The former Paris Saint-Germain striker is also able to milk several dollar bills from Corden throughout the sketch in return for his fortune telling. At the end, he pretends to break down half way through an answer to one of Corden's questions. Desperate to know the answer, he empties all his money into the slot in a desperate attempt to get Zlatan working again. When he eventually gives up and walks away, Zlatan is seen laughing to himself while counting his money.

Ibrahimovic has scored three times since his arrival in California in March. He inspired the Galaxy to a victory on his debut against the newly founded Los Angeles FC in March - equalising with a long distance screamer before heading a winner in stoppage time. Since then, he's only scored one more goal for the club - the winner in a 1-0 victory at Chicago Fire in mid April.

The striker left United in March after failing to reclaim his place in the team following knee ligament damage he picked up a year ago. Having finished last season as United's top scorer, he was initially released by them last summer after picking up the injury prior to signing an extended contract. However, he continued to use the club's facilities as he recovered, and the club agreed to sign him for the remainder of the season. Despite making a comeback, his opportunities at United were limited and the club agreed to departure in March.