Russian Premier League outfit Zenit St Petersburg have received a whopping offer to change their name to 'Zenit Burger King,' according to reports in Russia.

The American fast food behemoths approached the club at the start of the week with offer of 500m roubles (£5.75m) to purchase the club's naming rights with Russian journalists getting hold of a letter allegedly sent from Burger King to the club.

Although the name change would make any future European fixtures against Hamburger SV loaded with so many terrible joke possibilities that commentators would cream themselves into a deep coma, it's not going to happen as Zenit have apparently rejected the offer.

And too rightly - since Burger King insulted pun fans around the world by not asking the Russians to change their name to 'Zenit St Petersburger'.

Zenit have received a €6.8-million offer from @BurgerKing to change team's name to "Zenit Burger King".


Is this the way that football is going? 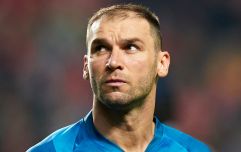 END_OF_DOCUMENT_TOKEN_TO_BE_REPLACED

It might not be a lot of money in footballing terms - especially not to sell your club's soul like this - but to be honest, for that amount of money, I would be willing to have myself surgically modified to look like the Burger King himself.

Alas, I am not a football club and so my dream must die.