The World Cup semi-final will be the latest instalment in the Lovren v Kane saga. Can the former alter the narrative and neutralise his kryptonite?

Two hundred and sixty one days have passed since that inglorious half an hour, where two diabolical Dejan Lovren misjudgements were maximised by Tottenham, prompting Jurgen Klopp to substitute him before the Liverpool manager  declared he would have done a better job in both situations had he not been “in the middle of the technical area in trainers.”

The 30-minute apocalyptic spell ultimately decided the game at Wembley - Spurs triumphing 4-1 - and could have spelt the end for the defender at Anfield.

Moreover, his career was in danger of being distinguished by that detailed chapter on What To Absolutely Not Do When You’re Defending.

Instead, the 29-year-old ascended from the debris of that disasterclass to help steer Liverpool to the Champions League final, in which he was their joint-best player, and has been core to Croatia reaching the semi-finals of the World Cup.

On Wednesday, he will line up against England and, more specifically his kryptonite in Harry Kane. 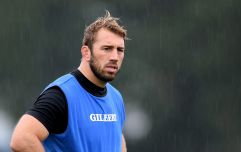 END_OF_DOCUMENT_TOKEN_TO_BE_REPLACED

It was the forward who punished Lovren for those two errors at Wembley last October, scoring off the first as the defender dithered and tried to play him offside.

He then set up Son Heung-min as the Liverpool centre-back attempted to reach a Hugo Lloris throw first, but watched the ball drift over his head and drop to Kane in space.

Thierry Henry put the mistakes down to Lovren's "raw fear" of the England international, while Graeme Souness said he “looked in awe” of the striker.

Klopp, meanwhile, felt it was more an issue of concentration and overcompensation. What is undoubtable is that Lovren recognises the needs to elevate his game against Kane. Unquestioned, too, is that he largely mismanaged that last season.

In the reverse fixture at Anfield, Spurs were awarded two late penalties and the first involved the same protagonists. Kane was in an offside position, but Lovren’s botched clearance to try and cut out Dele Alli’s supply to the attacker created a new phase of play before Loris Karius rushed out and impeded the No. 9 in the box.

Liverpool argued that there would have been no need for Lovren to intervene if Kane wasn’t influencing play.


The battle between the pair was then transported to Instagram with the former referring to the latter as “Mr Touch” in a conversation with Mohamed Salah on account of the Spurs star successfully claiming a goal off his team-mate Christian Eriksen.

END_OF_DOCUMENT_TOKEN_TO_BE_REPLACED

At the Luzhniki Stadium in Moscow, yet another layer will be added to this narrative.

Lovren will have noted the confidence of England supporters and former players over his impeding tussle with their captain. He is certainly not in need of extra stirring for the showdown, but would absolutely cherish demolishing their conviction.

One of his aims during this tournament has been to "prove that I am one of the best defenders in the world," pointing out that "when some people insult me, it has strengthened me."

He was more detailed on the topic of criticism in the build-up to Liverpool’s Champions League final against Real Madrid. When asked what motivates him, Lovren responded: "Your words. When people say I am not good enough, I will just show you I am good enough. It is as simple as that.

"I like when people talk bad about me. When I have the confidence of the manager, I don’t need anything to reassure me any more. Of course you have one or two situations where you don’t play well, but which defender doesn’t make mistakes? Sometimes people make it bigger than it is. But it is how it is with me.

"I struggled a lot in my life from day one and, you know, there is belief within me. It will never go.

"People would mock me at school. As a teenager, they said 'you cannot play like a defender'. People said I didn’t have a left foot, that I wasn’t quick enough.

"You know what? All these small things, they push me. I don’t have a left foot? I will hit better today with my left foot than my right. I always work on these situations.

“It helps me to be honest. And criticism, even if I don’t like it, I like it to hear — I know what to improve at the end."

Lovren’s combative approach threads tightly into Croatia’s success in overcoming adversity thus far in Russia with their manager Zlatko Dalic describing their knockout games against Denmark and Russia - both decided by a penalty shootout - as “being through war.”

Against England and the leading candidate for the Golden Boot, he is counting on his “top centre-backs who managed to stop Messi and Eriksen."

For Lovren, revenge would be a dish best served with a knockout blow in the World Cup semi-final.


popular
Newcastle United sign bricklayer mate of Allan Saint-Maximin... no, really
Conor McGregor pays tribute as Khabib retirement blows division wide open
QUIZ: Name all 50 of these 2000s Champions League players
You'll have to be an old-school fan to get 20/20 in this 1990s footballers quiz
Fans rage as sad-looking Donny van de Beek watches on from the stand again
Can you name every top European football club that begins with 'A'?
QUIZ: Name the obscure characters from The Simpsons (Part Two)