Why Mexico 1986 was the best World Cup ever

World Cups are all wonderful, this is indisputable fact

It’s just that 1986 was more wonderful than the rest.

END_OF_DOCUMENT_TOKEN_TO_BE_REPLACED

I was twelve that summer. Old enough to understand life, still young enough to not be worn down by it. It was Thatcher’s Britain: three channels on the telly-box, Derek Hatton, Lech Walesa’s Solidarity Movement and ‘Freddie Starr Ate My Hamster’.

I’d fallen in love with a French actress called Beatrice Dalle who starred in a film everyone pretended they’d seen but they hadn’t. Not that I knew what love or even lust really was in that sense, but I knew felt something. However, in truth she was just a diversion from the footy, which is what I loved most of all.

Back then there was no wall to wall football. No Indy Kalia. No transfer rumour pages, no hipster journalists. Definitely no FIFA 86. You had sticker books – my Mexico 86 version was completed, and I’ve still got it if you don’t believe me. And sticker books were brilliant and important. They gave you life.

You didn’t know who Rayo Vallecano were, and nor did you care. Your footballing map of the world was confined to the First Division where Liverpool won the title and Sheffield Wednesday finished above Chelsea and Arsenal.

END_OF_DOCUMENT_TOKEN_TO_BE_REPLACED 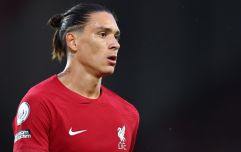 END_OF_DOCUMENT_TOKEN_TO_BE_REPLACED

You see back then there was a mystique about football and footballers in general, especially those from abroad. The English game was a Brexiteer’s dream: all white, all British. Ipswich had a few foreign lads, but Suffolk pretty much felt like it was annexed with the Benelux, so they got away with it.

You’d hear commentators like Peter Jones eulogise about Zbigniew Boniek and Vasily Rats and Yannick Stopyra during grainy radio commentaries on Sport on 2 and there was something magical about hearing their names and trying to visualise what they looked like and how they played. About the teams that they played for.

Forget about the Barcelona’s and the Bayern Munich’s for a moment: the first round of the European Cup in the 85/86 season involved teams like Gornik Zabrze of Poland, Rabat Ajax of Malta, Kuusyi of Finland and Jeunesse Esch of Luxembourg, who lost 9-1 to Juventus.

That Juve side, with its Ariston shirt – still the greatest football shirt of all time by the way – and starring one of my four heroes growing up, Michel Platini, had everything. Even now, 32 years on, I look back at my Platini scrapbook and marvel at his talents. Yeah, I still have the Platini scrapbook as well. What of it?

Anyway, I digress. But you get my point. There was a glamour about the World Cup back then that doesn’t exist today. Brazil’s squad had just two players who played outside South America. Christ, 20 of the 22-man French side played in Ligue 1! Michael Laudrup was called Mi-ka-ael Laudrup in ’86. We didn’t know the players. We barely knew all the countries.

The world seemed so vast, so enormous. It wasn’t like you could AirBnB a flat in the coolest district of Buenos Aires or book a flight to Australia on a compu…….on a what? Life wasn’t like that. We had a week in the Canary Islands and it felt like Paradise.

So, when the tournament rolled around, there were these players that you’d never heard of before that became absolutely central to your entire being. And the World Cup was better for it. You’d wake up thinking about Josimar and Julio Olarticochea. You’d go out in the garden and try and be Hugo Sanchez scoring past an imaginary Jean-Marie Pfaff.

And you’d obsess over for months on end about these idols from far-away lands. Especially those with one name: Zico and Branco and Chendo and the Portuguese midfielder Diamantino. There were twenty-nine players at Mexico 86 who just had one name. As a 12-year old who loved the game like he loved his mum and dad, I’d have given anything to have had just one name. It was so damn sexy.

Mexico 86 had everything: great goals - Careca, Rochteau after the cutest piece of nonchalance you’ll ever see from Platini, Laudrup’s dribble against Uruguay, Igor Belanov, Negrete’s bicycle kick - Des Lynam, ‘Lineker far side……coming in on it now!’, Gordon Strachan trying and failing to jump a hoarding, the massive spider shadows on the centre circles, Tony Gubba, big box nets, the wave, 11pm kick-offs with your dad and a glass of cold milk and a biscuit, and Aztec Lightning as the BBC theme tune.

It also had Diego Armando Maradona, the greatest player of my lifetime, and it had the greatest piece of commentary of all time to accompany his second goal against England in the quarter-finals.

Yeah, he was a cheating bastard, but by the Hand of God he was a brilliant cheating bastard. He didn’t quite carry Argentina to glory on his back, but he was better than everyone else in the best World Cup tournament of all time.

popular
Multiple fatalities after planes collide mid-air over airport
Former Playboy Bunnies detail what it was like having unprotected orgies with Hugh Hefner
Pilots fly over destination airport at 37,000 feet - because they were both sleeping
Gerard Butler breaks silence after death of 'brother in arms' Darius Danesh
Incredible case of the only known individual whose parents were two different species
UK city named the 'most dangerous' in Europe, according to study
Mum cuts off boyfriend's 'private parts' after he 'tried to rape 14-year-old daughter'
You may also like
Sport
Jurgen Klopp reacted like everyone else to Darwin Nunez headbutt red card
Life
Liverpool is entering into a golden era – here’s five reasons why
Sport
Jamie Carragher jokes ex-Liverpool man Conor Coady is a 'turncoat' after joining Everton
Sport
'Empty Old Trafford' trends as Man Utd fans look to send Glazers a powerful message
Sport
Jurgen Klopp slams 'really bad' Liverpool attitude after Fulham draw in Premier League opener
Next Page